Dining News: More on the Demise of Market Cafe 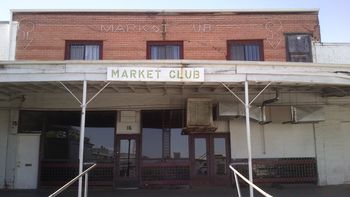 Owner Jim Sakata suffered a heart attack in early April, shut the Market Club on an emergency basis and then never reopened. There was no farewell. No send-off. No party. No time to say goodbye and thanks for the memories.

Reach at his home, Sakata, 62, told me he suffered a heart attack within days of a health inspection report that forced the temporary closure of the restaurant. The inspector found rats droppings in a storage area. Sakata said he hired a crew to clean it up and take care of the problem, hoping to reopen soon.

"The next day, I just felt really lousy," he said. "I was home and got up to go to the bathroom and I just collapsed. I felt weak. There was a slight tightening in my chest. I'm fine now, but I don't think I can keep going the way I was going. I was working pretty much seven days a week. It was just me and my wife."

The Sac Bee's Robertson reports that one of Sakata's regrets is not saying goodbye to his regulars.

Read the story in the Sac Bee.

Local brewers turning to West Sacramento as prime location - The needle on the compass of the local beer scene has been pointing East over the last couple of years. Breweries like Knee Deep (Lincoln), Loomis Basin and Auburn Alehouse, as well as craft beer joints like Samuel Horne’s (Folsom) and Boneshaker’s (Rocklin) have been hogging headlines when it comes to new spots. It’s about time to start looking West. “(West Sacramento) has a pretty good reputation of being proactive, it’s just the right size where they can get stuff done,” said A.J. Tendick, a home brewer for the last five years and co-owner of the soon-to-open Bike Dog Brewing Company in West Sacramento. Aaron Davis in Sac Mag.

37 restaurants, 29 wineries join Forks & Corks fundraiser - In a fundraiser for the School of Culinary Arts program at American River College, the American River College Foundation and Amador Vintners are presenting Forks & Corks on May 18. The dinner runs from 5 p.m. to 8 p.m. and will feature food from at least 37 restaurants, including Ella Dining Room & Bar, Ettore’s, Frank Fats, Mulvaney’s B&L and Ginger Elizabeth. They will be accompanied by 29 Amador County wineries. Mark Anderson in Sac Biz Journal.

City Residents are Missing Out on Food Trucks - On any given weekday, how often do you see a food truck in downtown or midtown? Think about it. While it's true that there will be about 27 street food vendors under the freeway on Saturday for SactoMoFo 6, the question must be asked: Why do we rarely see food trucks in the city? Two years to the day after SactoMoFo 1, nothing has changed with city ordinances and this has, in fact, caused most of the regions food trucks to give up on the city altogether. Catherine Enfield on Sac Press.