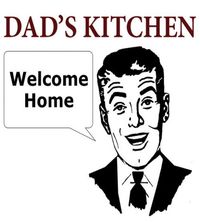 Dad's Kitchen, open in its current incarnation since 2010, is a great neighborhood spot in Land Park. It's lot is always full, the line can be long, but generally, it's worth it.

I ate dinner there a couple weekends ago while checking our their new Tap Room and was blown away by the burger. I had always heard about the quality of their version, but had never tried it. If you go, order the burger. You won't be disappointed.

Sac Bee restaurant critic Blair Anthony Robertson also paid the restaurant a couple number of (Updated 6/1, per this twitter conversation with @BlaRob on assumptions, descriptions of numbers and vagaries) visits. Here's his verdict:

The menu is, at its best, creative, and the cooking is sometimes right on the mark. The Dad's burger, for instance, is a magnificent achievement of engineering, art and insanity. The meatloaf made with a blend of beef, veal and pork is absolutely delicious and perfectly tender.

Yes, there's a "but" moment, though we're not talking a big but.

What's holding Dad's back from maxing out its potential is what holds many restaurants back – execution and consistency.

Read his entire review in the Sac Bee.

First Impressions: Port maker opens midtown spot - After a delay of more than six months, Ficklin-Wilcox recently swung open its doors to bring a taste of port wines to midtown. Ficklin-Wilcox specializes in port – fortified wines made from Portuguese grape varietals – and has produced them for nearly 70 years in the sun-baked Central Valley town of Madera. In any case, with its first satellite location Ficklin- Wilcox adds to a growing wine scene in the central city, which includes Downtown & Vine on the K Street mall and the urban wineries Rail Bridge Cellars and Revolution Wines. Let's see how Ficklin-Wilcox fits into the local wine scene thus far. Chris Macias in the Sac Bee.

Photo Essay: A Visit to Doughbot Donuts - These donuts aren’t fluff, they’re clearly denser, handmade donuts, with deliciously homemade fillings and toppings. My favorite was the Lemon Lavender, though I couldn’t really taste the lavender. Lori on Guava Rose.

Turkish restaurant Anatolian Table open in midtown - The new Anatolian Table bistro in midtown Sacramento is celebrating its grand opening dinner Thursday with a private party...The 70-seat restaurant opened for lunch and dinner earlier this month in 1,700 square feet of space at 2319 K St.Mark Anderson in the Sac Biz Journal.

Davis BeerFest - Spend a beautiful afternoon in Davis tasting from more than 100 handcrafted beers from more than 40 breweries at the Davis Beerfest, taking place on June 1. Sudwerk Brewery will open its doors to all for a day filled with tours, raffles, delicious beer brat sandwiches, tips and secrets from area brew masters, and live musical performances by Massive Delicious, ZuhG and Lava Pups. Breweries in attendance will include Anchor Steam, Lost Coast, Ruhstaller and Sierra Nevada, plus many more! Laura O'Brien on Sac Mag.

Perfect wines to match with Grilled Lamb - Seasons 52 executive chef Scott Florio and David Phillips chat with Diedre about the Grape Escape this weekend. On KCRA.