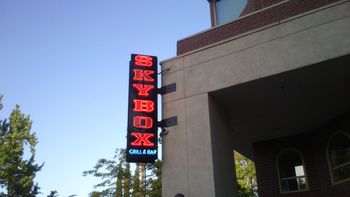 As first reported in Cowtown Eats, Skybox Grill (formerly MVP Sports Grill at 21st & L streets) is under new management and is revamping its menu.

Sac Press's Jared Goyette has the details on what its new menu will look like.

"We're going to get with the times and get a lot more consistent, a lot more local" he said. "The menu is going to be a lot more fresh, with made-to-order items."

Skybox will, as the name suggests, still be a sports bar with wall-to-wall TVS, but one where there is a greater emphasis on quality food with fresh and local ingredients. You can still get your onion rings or fries, but they'll be fresh, not frozen, and there will be healthier options on the menu as well – like veggie sandwiches or falafel. The restaurant has already started to implement some changes, and a new menu should be finished in the next few weeks.

Goyette also reports that the new restaurant will have its grand opening on June 24.

de Vere’s: Go For the Brunch - Any beer lover will tell you that de Vere’s Irish Pub is one of the liveliest, friendliest, most distinctive spots in town to guzzle a mug of ale, watch your favorite televised sport and play an entertaining (and competitive) game of trivia. But they may not know that de Vere’s also plates up some of the heartiest, most flavorful brunch fare in the neighborhood. I have thoroughly enjoyed brunch on several occasions at this L street pub. Kira O'Donnell in Sac Mag.

Sacramento's 4th Street Grille is closing - Fleming said the landlord allowed him to continue operations since last fall, "but eventually, time ran out. We were not considered a good fit, and we couldn't find a buyer, so that's it." Fleming leased the site for years and said today that two recent deals to sell the restaurant business fell apart. He figures he paid about $2.8 million in rent over 21 years. The 4th Street Grille employed about 20 people. Fleming said he believes another restaurant is planning to open at the site, but he had no further details. Mark Glover in the Sac Bee.

El Chilango Taqueria: Hold the bacon - This torta certainly rivals those at El Abuelo Super Tortas Chilangas and surpasses some at Ciudad Nezahualcóyotl, but it’s the gordita you’ll return for. El Chilango’s gordita comes out steaming hot, stuffed with abundant chopped cilantro and onion, melted cheese and caramelized bits of chicharrón. The masa is crisped and oily on the outside and cooked all the way through with not a hint of the gumminess that can sometimes plague similar dishes, such as pupusas. The gordita is so good that I demolish the whole thing, despite having already eaten half of the torta, a ceviche tostada and the better part of three tacos. Becky Gruenwald in Sac News & Review.