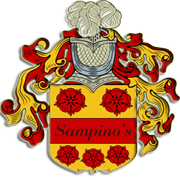 The owners of Sampino's Towne Foods will open a Mexican restaurant next door to the deli in September, reports the Sac Bee's Allen Pierleoni.

The space next to Sampino's was long occupied by a Chinese restaurant that closed. Michael Sampino wasn't specifically thinking of opening a new restaurant there when he began negotiations to buy the space.

"I bought it because I wanted the 20-foot hood system in its kitchen and to have more electricity," he said. "We've maxed out every ounce of electricity this building (that houses Sampino's) will allow. The (next-door) kitchen will let us double our capacity of (the foods) we can prepare for Sampino's."

Since we're on the subject of Sampino's, I hear great things about their lunch, but have never made it out there myself. I have, however, been able to make their Friday Night Dinners.

I went once at the end of last year, and while I could tell the family who runs the restaurant was really trying, I was a little underwhelmed. At $35 or $40 per person (depending on what you order), they offered a lot of food, but the quantity didn't make up for its inconsistent quality. Between the 3 of us and an inexpensive bottle of wine, we spent $164, including tax and tip. For that amount of money, we should have gotten a great meal and not just a lot of food.

I'm not sure if I'll try their dinner again, but I do look forward to trying their lunches.

Fabulous Al Fresco Summer Dining at Zocalo - The city is full of terrific outdoor restaurant patios, but one of my favorites is at Zocalo, located on the corner of 18th street and Capitol Avenue. Not only is this popular spot located in the very heart of the hip dining scene in midtown, but it offers some of the best people-watching (and fresh-made guacamole) in the neighborhood. Kira O'Donnell in Sac Mag.

Brown-Bagging It - Every Monday, four to six wine stewards, many of them preparing for the tasting portion of high-level sommelier exams, gather for what they call brown-bag blind tastings where they formally assess wines from around the world. Think of it as a study group for the taste buds. Catherine Warmerdam in Sac Mag.

Zero Food Waste: Farm to fork and back to farm - Imagine a local food system that produces zero waste. That’s the dream of nonprofit executive David Baker of Green Restaurant Alliance Sacramento, or GRAS. He oversees a nonprofit with the ambitious mission of turning Sacramento into a “ leading sustainable food community” in which restaurants don’t send food waste to landfills. Amber Stott on Sac Press.