Dining News: The Origins of LowBrau 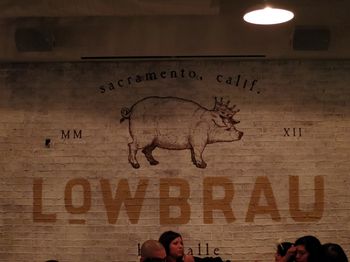 Every superhero has a great backstory. And it turns out that the super popular restaurant LowBrau has a great one too. Sactown Mag's Kate Washington has the details.

Despite the pair’s vision, however, they were new to the tough restaurant business. As Nutting puts it, “Here we are, two guys that don’t have any experience, just a lot of passion and a really cool concept.” When they met with MARRS owner Michael Heller about the space, as Nutting tells it, “He asked us if we had restaurant experience, and we were like, ‘Well, we’ll be right back.’ ” The pair then approached bar-restaurant Shady Lady Saloon’s management team, who became consultants and helped refine the concept. Nutting continues: “So we went back to Mike Heller, and we were like, ‘OK, we’ve got restaurant people on board.’ And he was like, ‘Great. Do you have any money?’ And we were like, ‘We’ll be right back.’ So we just started pounding the pavement.” At the time, Hargis confesses, “I was [so] broke I didn’t know where I was going to get gas money to meet the investors to ask for money.” Somehow he did, investors responded with enthusiasm, and the pieces fell into place. From conception to opening, however, took nearly two years (the restaurant debuted with a soft opening just before New Year’s Eve).

INK Eats and Drinks: Decade of Decadence - It’s not often that art, food and commerce converge, but after a decade in one of the most challenging businesses to break through, the tattooed-themed INK Eats and Drinks has built a solid following of regulars and bar hounds who frequently gobble up its fare. “We’re not trying to be a chain or corporate,” says Christina Arntson, bar manager and assistant general manager. “Our success was just [being in] the right time and location—it was like the stars aligned and now we’ve been here for 10 years.” Lovelle Harris in Submerge Mag.

Mylapore: Like training for a marathon - Because there is much to like at Mylapore, starting with the giant dosas. Dosas are ultrathin crepes with a savory filling. They range in size from 3-feet-long ones to 1-footers served as an assorted platter. The standard dosa is loaded up with turmeric-seasoned potatoes and onions. Mylapore also serves a “spring” dosa filled with oniony coleslaw. I’m no stranger to the crunchy, hollow bite-sized snacks called pani puri, and I knew the proper procedure is to fill them with cold potatoes and garbanzo beans and maybe a chutney or two. What I didn’t know until I asked the server, however, is that one is supposed to fill them with the accompanying mint water and try to eat the bite before any leaks out. It makes sense: “Pani” means “flavored water.” What a fun, refreshing snack—no wonder these are a popular street food in India. Becky Gruenwald in Sac News & Review.

ED GOLDMAN: Meet the two geniuses behind  - Pajo Bruich and Jenny Yun — the executive chef and general manager, respectively, of Enotria Restaurant Wine Bar on Arden Way at Del Paso Boulevard — finish each other’s sentences and live to eat. The central difference between them, besides their heights and cultural roots, emerges when Yun says, “I don’t cook.” A good thing that Bruich, formerly of midtown Sacramento’s Lounge ON20, does. Ed Goldman in Sac Biz Journal.

ED GOLDMAN: He's a Type-A chef - Pajo Bruich is the tall, lanky young chef with the electric grin who’s turning dining expectations upside-down at Enotria, the Del Paso Heights restaurant that’s chewing its way to destination status. “It’s simple," he says. "I love food. I love people. I love good service.”...Bruich, married and the father of two- and four-year-old daughters, says he sometimes wakes up in the middle of the night and writes down a recipe or a concept or just an unusual ingredient “that I never would have thought of while I was awake. I’m not sure I understand why it happens, but it does.” Ed Goldman in Sac Biz Journal.