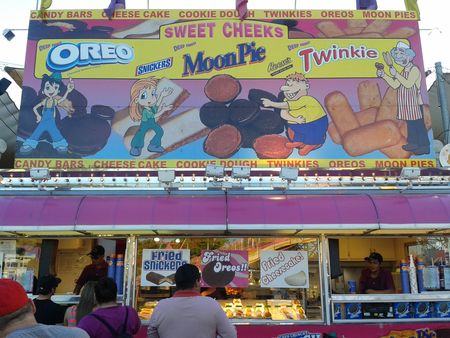 Every year, I head to the State Fair for an evening of fried food. Sure I walk around the rest of it to see cows get milked, Huell Howser get remembered, and carnies try to fleece unsuspecting fair goers out of their hard-earned money with their rigged nearly-impossible games.

But the star to me is the fried food, and my visit this past weekend was no exception.

I looked for the fried foods that I had never seen there before. Might the foods I tried have been served at previous fairs? Maybe. But they were new to me and begging to get eaten. 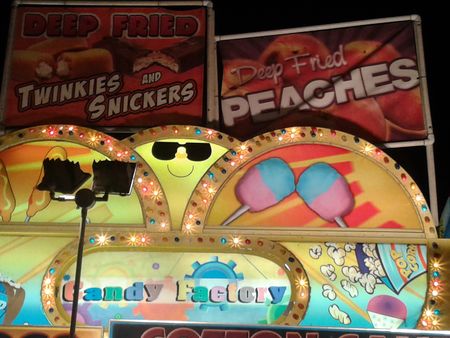 Our first sweet treat was Fried Peaches at the Candy Factory food stand near the horse racing track and the Rockin' Tug Ride. At $5, we thought it'd be worth a try. Before we ordered, we hoped that we'd be treated to sliced fresh peaches since it's the height of peach season. After we ordered, though, we saw them pull a half dozen sliced peaches from a vat of syrup in the fridge. Clearly, they were canned. Not surprisingly, though, it didn't really matter after they were dunked in batter and deep fried, and smothered in whipped cream and powdered sugar. 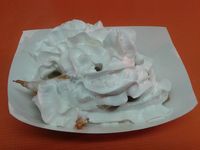 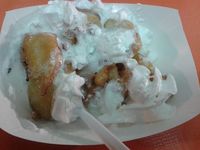 Fried peaches, as served (left) and with the whipped cream moved out of the way (right).

The outer layer was very crispy and had a great crunch. The actual fruit was a little too hot - like biting into an apple pie that had just been taken out of the oven. It wasn't delicious, but it was adequate. I wouldn't seek this dish out in the future, but I certainly wouldn't turn it down if I stumbled upon this booth again.

We then moved onto the Sweet Cheeks booth (pictured up top).

Our second item was deep fried Cap'n Crunch. Normally, I wouldn't have ordered this, but given how hilarious their PR team was when faced with accusations that he wasn't actually a Captain, I thought I'd give it a shot. My hope was that it'd taste like deep fried rice crispy treats. 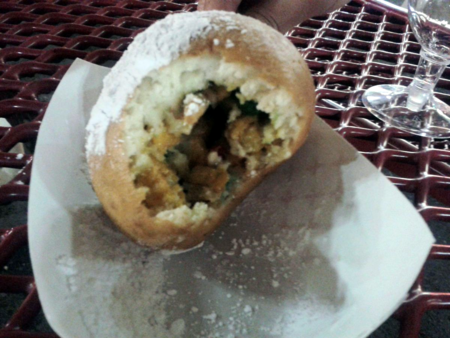 I was wrong. This was a terribly conceived and terribly-executed dish. If you could imagine soggy cereal wrapped in fried dough, you've got the idea. My guess is that the steam from the deep frying made the cereal moist. I definitely wouldn't spend $4.50 on this again. 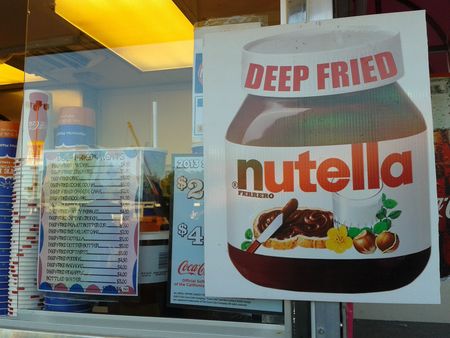 The last of the 3 items we tried was the Deep Fried Nutella. At $5, this was the best that deep fried fair food has to offer. Each serving contains a small ice cream scoop's worth of the chocolate and hazlenut spread. I imagine that to make it, they freeze the Nutella, cover it in batter and deep fry it. When it gets to your mouth, it's warm like hot fudge, but not searing hot. 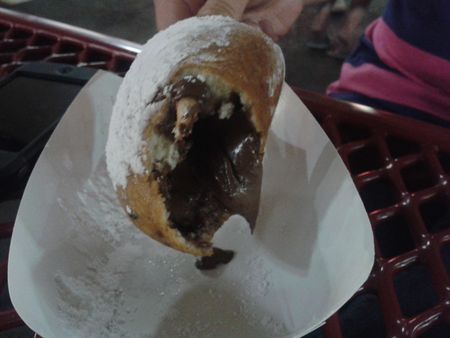 My wife, a self-professed Nutella fan, loved this dish. I agreed that it was the best of the bunch, and I'd order this regularly if it were on a dessert menu somewhere.

Really, it's impossible to go wrong with deep fried foods, but some are much better than others. Run toward the Deep Fried Nutella, but steer clear of the Cap'n Crunch.

A couple other random thoughts: 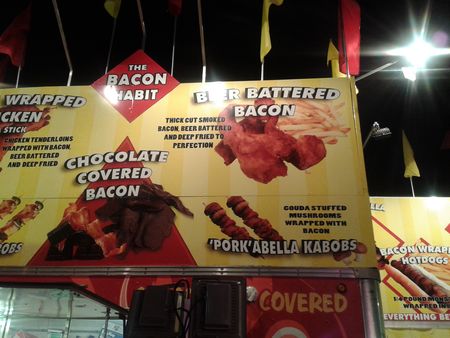 The fair runs through Sunday, July 28.

Get more info at BigFun.org.

Did you happen to spot the chocolate covered corn dogs?