Capital Dime, the much-hearalded restaurant by Chef Noah Zonca (whose last gig was leading the restaurant at The Kitchen), held its official grand opening this past weekend. On Monday, four friends and I stopped by at lunch to see what the hype was all about.

Located at the space last occupied by L Wine Lounge at 1801 L Street, the bones of the restaurant remain the same. There’s a downstairs area with a bar and an upstairs loft area. When we got there at lunch, our party of five comprised probably a third or a quarter of the lunch crowd.

We decided to order small plates (confusingly named “dime plates” without an indication that they’re shared plates and not entrees) and shared so we could each taste as much of the restaurant’s menu as possible. Each priced at $10, we decided to order: 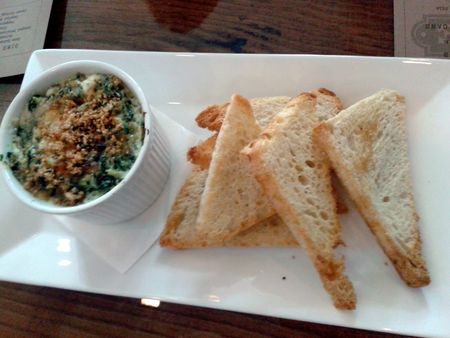 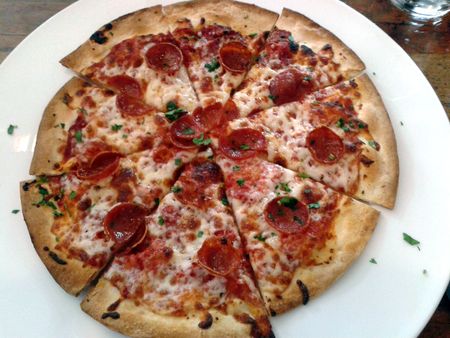 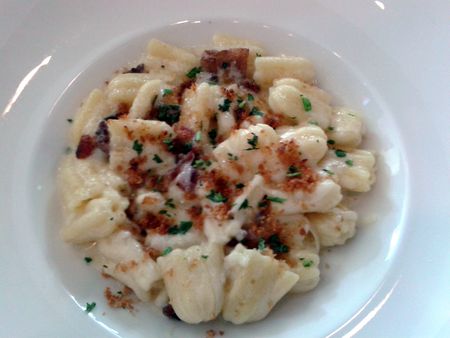 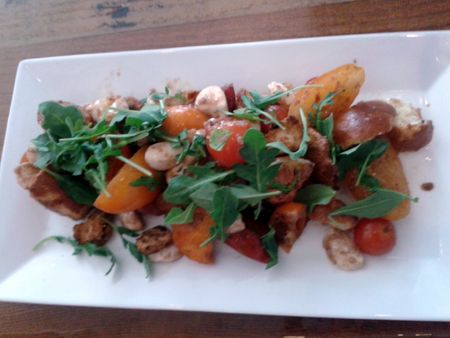 Our final friend – who is trying to avoid gluten – ordered a burger without the bun and with a side salad. Like the other sandwiches (cheeseburger, pastrami, kalua pork and flatiron steak), it was priced at $13. It’s not pictured since I didn’t think it was fair to judge a dish when such heavy modifications were made to what the chef intended.

From what we ordered, I would group the dishes into three different categories.

First, the mac and cheese and panzanella salad were clear winners. The mac and cheese featured copious amounts of bacon and the right amount of cheese so it was creamy without being cheese soup. I also enjoyed what the waitress said was a pumpkin-shaped pasta, with extra ridges that the cheese could cling to. The panzanella salad had fresh and luscious heirloom tomatoes. It has big chunks of toasted bread and plenty of cheese. I later ran into a friend who runs another restaurant in the same building. He also agreed that the panenella was a great dish.

The second category of dishes were those that were adequate, but not special. The artichoke and spinach dip and the pepperoni flatbreads fall into this category. While early online reviews raved about the dip, our whole party thought the dish was unremarkable. While it had an unusual amount of spinach and artichoke, because it was covered in cheese, it was impossible to determine how fresh/local it was. We also understand that real estate costs are high in that building, but our group thought a fairer price for that dip was in the $7.50 range, not the $10 range, and come with more toast. The pizza, with a 9 inch diameter, was just fine. Nothing was wrong with it, but there was nothing special about it. When I go back for after work drinks, I think the flatbread would be a good dish to order and share with friends.

The last category of dishes we tried were those that had a good concept, but were executed poorly. The Thai noodle chicken salad fell squarely into that category. While I could tell what they were going for, we all agreed the salad had too much dressing and was too salty. It looked tasty when it first got to the table, but in the end, it was the dish that we didn’t finish.

Given that they’re still getting their bearings, many of the problems we encountered today were understandable. The restaurant shows great potential, but its execution at our lunch on Monday was still lacking. Some of the pricing could also use tweaking.

For the 5 of us, our lunch ended up costing $84, including tax and tip. We didn’t have any alcoholic drinks at lunch, although they do have 52 wines available as well as PBR ($3), Sculpin IPA ($5) and Alagash White ($6) on tap.

I look forward to giving Capital Dime another chance. I’ll go back for after work drinks soon, but I think I might wait a couple more weeks before eating another meal there to give them a chance to work out the kinks.

I want that panzanella salad now!