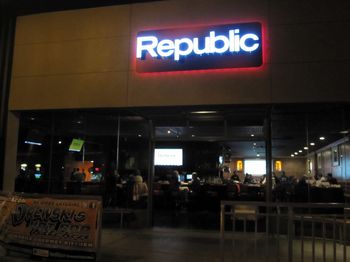 After opening a new location at McClean, Drewski's has decided to stop serving food at Republic, reports Chris Macias in the Sac Bee.

Andrew Blaskovich says the satellite version of his Drewski's Hot Rod Kitchen will end at Republic by Sept. 1. Blaskovich plans to use his upcoming McClellan Park location, which he expects to open in two weeks, as the hub of his operations which includes two food trucks and a recently opened cafe in Folsom.

"Basically, I outgrew the place," said Blaskovich about Republic. "The kitchen was too small for the overall volume of I'm dealing with. Besides, I couldn't park my trucks there and it costs me $1,300 a month for a commissary. Having my own facility saves me $1,300 out the gate and I have ample storage."

Macias also reports that Coast to Coast Sandwiches will replace Drewski's as the food vendor at Republic under the name of Capitol Burger Kitchen.

Another mobile food vendor is already in line to take over Republic's food program. The team behind the Coast to Coast Sandwiches food truck, which also operates the kitchen at midtown's Pour House, will begin running Republic's kitchen starting Sept. 4.

Instead of branding Republic's food program under the Coast to Coast Sandwiches banner, the team of Robert Ramos  and Sean Figueroa will introduce a new business called Capitol Burger Kitchen. As the name states, burgers will be the focus here along with other hearty foods that pair well in a sports bar setting.

Temple Coffee makes list of country's best roasters - Congratulations to Temple Coffee on being named one of the best roasters in the U.S. by national food website The Daily Meal. It's the latest kudos for Temple -- and for Sacramento's coffee scene, which continues to flourish. Blair Anthony Robertson in the Sac Bee.

Feeling Daring? Have an Offal Evening with Local Chefs - Adventurous diners will enjoy a unique event offered on Sunday, August 18th. “Have an Offal Day!,” which takes place from 2pm to 5pm at midtown’s Mulvaney's Next Door, celebrates “all those ‘other’ parts” of the animals we love to eat: including organs, feet, tongues, ears, skin and more. Kira O'Donnell in Sac Mag.

Blush bar space available again - The bar location on K Street which over the years has been a series of night clubs and bars is again available. Most recently known as Blush Ultra Lounge, the 3,000-square-foot bar is available. Mark Anderson in the Sac Biz Journal.

The Cellar Wine Bar adds full menu - Jeff Rempfer, owner of The Cellar Wine Bar, has been busy with The Cellar now serving a full dinner menu and bottomless Mimosa Sunday brunch. When it first opened, The Cellar served wine and cheese, and then added paninis and small pizzas.  People began to stay longer, and wanted to have food to supplement the wines they were tasting. Margaret Snider in the Folsom Lake Entertainer.