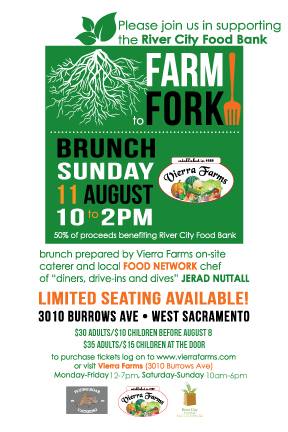 Jerad Nutall, the chef at Gatsby's Diner when they were featured on Guy Fieri's Diners, Drive-Ins and Dives, has joined West Sac's Vierra Farms as their on-site caterer.

I ran into Chef Jerad a few weeks ago when I was visiting Vierra Farms to load up on black watermelons. Chef Jared - who also runs the produce stand at Vierra Farms - told me that about 9 months ago, he left Gatsby's Diner after a nearly 4 year run and sold his interest in the restaurant. Running a restaurant didn't let him spend enough time with his young child, he explained.

Prior to working at Gatsby's, Chef Jerad worked at River City Brewing Co. (alongside Tuli and Restaurant Thirt13en chef Adam Pechal), Esquire Grill and Culinary Specialists, the catering arm of Mulvaney's B&L. In total, he's been cooking for more than two decades.

With his new job at Vierra Farms, Chef Jerad has started doing special Farm to Fork Brunches. (What's more farm to fork than eating at a farm?) The first brunch drew 50 diners, despite only having a week to publicize the event.

The next brunch will be Sunday, Aug. 11 from 10 to 2 p.m. Advance tickets are $30 for adults and $10 for children, with 50 percent of the proceeds benefiting the River City Food Bank. Those purchasing the day of will pay an additional $5.  The price of the brunch also offers either sangria of mimosas.

While the menu's not online, Chef Jerad described one dish that I can't wait to try. As his take on ketchup and eggs, he plans on starting with an heirloom tomato, scooping out enough to crack an egg inside and cooking that over a wood fire. (Note: the menu's not online so I don't know if it's changed. But even if it did, it gives you an idea of the creativity behind his dishes.) Actually, due to space constraints, the entire brunch will be cooked over a wood fire.

While we're talking about Vierra Farms, they've also become an event space. You can hold either an indoor event inside an old farmhouse or a larger, outdoor event on their giant lawn, where they can set up picnic tables or long "Italian-style" tables.

If you can't make it to the brunch, they're planning a Pre-Harvest Hoedown on Saturday, Aug. 31.

Pete’s Restaurant & Brewhouse: Pete’s goal is simple; good food and good beer - Life’s too short to eat bad pizza. This is basically the mantra of Original Pete’s Restaurants, who have been serving praiseworthy pizza to the greater Sacramento area since 1987. While I have childhood nostalgia for Original Pete’s, I had not yet patronized their newest incarnation (in 2006, they partnered with Firestone Walker Brewery, created handcrafted brews and opened Pete’s Restaurant & Brewhouse). To remedy the situation, I recently visited their Granite Bay location. Kelly Soderlund in Style Mag.

Brick House owners build on Elk Grove success with new deli - The Cassella brothers want the works – salamis, pancetta, mortadella and plenty of fine cheeses. And they'll be selling all of it by the pound at a new delicatessen they plan to open Sept. 17 in Elk Grove...Geno and Franco Cassella got their start in Elk Grove about seven years ago with the Brick House Restaurant & Lounge at 9027 Elk Grove Blvd. Their new deli, Cassella Brothers' The Italian Delicatessen & Fine Foods, will be across the street. Cathie Anderson in the Sac Bee.

VIDEO: Dishin' With Tina: Rainbow's End Cafe - Tina Macuha checked out this delicious food of this local restaurant and why it is the favorite of many around the area. On Good Day Sac.