The cronut is the dining world's latest fad. A hybrid between a croissant and a donut, it was invented a month ago by New York chef Dominique Ansel. The $5 pastry has led to hours-long lines, and more than a dozen imitators across the world.

Before last week, the closest place to get one of these knock offs was in the Bay Area, and a number of bakeries also served them in Los Angeles. On a recent work trip to Los Angeles, I actually considered driving 45 minutes each way (with traffic) from LAX to Santa Monica to try one of these creations. Unfortunately (or maybe fortunately), I ended up too busy to make the detour.

Now, Sacramento has its own version of the Franken-pastry, called the doissant, by Sweet Dozen, a donut shop out in Carmichael.

I drove the 26 mile round trip from my house on Sunday morning to sample one, and I was surprised by how good it was. 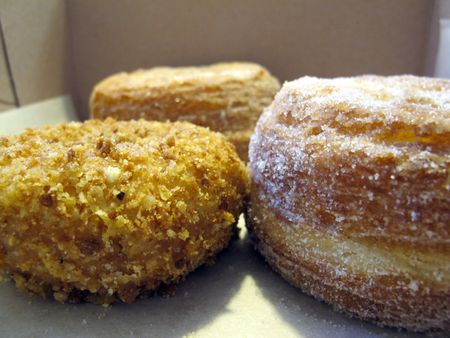 Despite all the hype, I had low expectations. First of all, donuts are amazing. How could they be improved upon? Second of all, I expected that someone would make a substandard knock off so suckers (like me) would drive out to try it.

The doissant ($3 for the Sacramento version) is shaped like a donut, but with the flaky layers like a croissant. When you bite into it, it's very buttery and with distinct layers. It has the texture of a croissant, but the fried crunch of a donut. It's also much taller than a regular donut.

On Sunday, it was so good that I had more than one doissant. My preferred way to eat it is to pull the doissant apart layer by layer horizontally so you can have more of the croissant taste in each bite. The donut-portion of the pastry masks a lot of the buttery goodness if just bitten into. Separating it lets you taste all the calories.

The doissant was only available in one flavor on Sunday - covered in sugar, but twitter chatter seems to suggest that they can make it in other flavors if you call ahead and give them 45 minutes. I talked to the nice lady who was working the register and she said that it took them a month to perfect the recipe. She said her daughter had heard about the sweet treat and encouraged them to try to make their own version.

I can't compare this doissant to the original cronut or any of the other knock offs since I've only had the Sacramento version, but I liked the ones I had on Sunday better than a cupcake and most donuts. On a lazy Sunday and without traffic, it was worth the drive out there and the $3. I'm not sure it's good enough to be worth getting up an hour early to get it on a weekday (assuming you live and work near downtown).

Doughbot has said in a series of tweets they have no plans to try to make their own cronut/doissant. "For the record, we're anti-cronut. We respect the beautiful, flakey (sic) goodness of croissants too much to put them through a deep-fryer...Also, no interest in trying to reverse-engineer something we've never personally eaten, and will not likely have time to try," they tweeted on Aug. 14. I hope somebody closer to downtown decides to give it a try so I can have it more often. (I'm looking at you, Estelle's Patisserie on K St.) 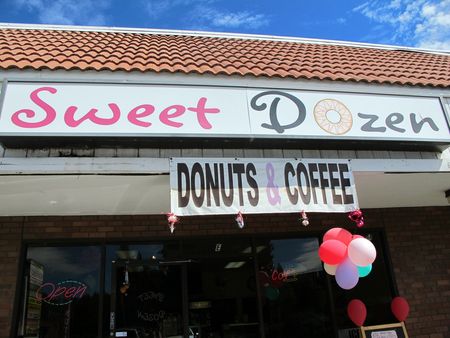 Sweet Dozen is located at 5207 Madison Ave. It's open every day at 5 a.m., and closes at 3 p.m. on weekdays and 1 p.m. on weekends. Find them online at SweetDozen.com or on Facebook.

H/T to @BurgerJunkies and @Chris_Macias who apparently first located the doissant at Sweet Dozen. Macias, a Sacramento Bee food writer, said on Twitter that one doissant he tried was a "solid 7" and that the Bee will have a story on the pastry in Wednesday's paper.