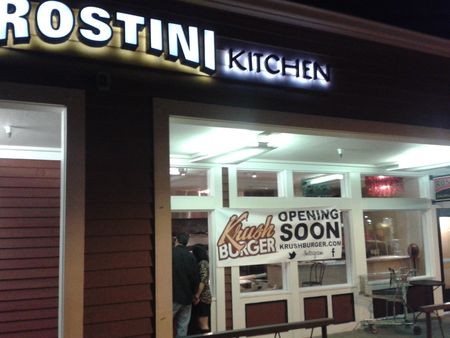 Krush Burger, the Sacramento food truck pioneer turned restaurant mogul, announced that it's next brick and mortar location will be in Davis.

Soo excited to announce our newest location opening in.... Davis!...will be at the Marketplace Center on West Covell Blvd. Dec 2013 🍔🍟🍴🍺

The newest location in the college town, at 1411 West Covell Blvd., is Krush Burger's second location in California, with an additional location in Dubai.

This location is near student housing and in a shopping center anchored by a Safeway supermarket frequented by both locals and part time residents. Other eateries in that shopping center include Dos Coyotes, Jack's Urban EAts, Jamba Juice, Panda Express, Noah's Bagles, Peet's Coffee and Togo's.

Krush Burger replaces Rostini Italian Kitchen, which closed in Feb. after a 2 year run. Prior to that, the space was occupied by a Strings Italian Cafe, per the Davis Patch.

I stopped by on Saturday evening, and it looks like the space needs a little work before it can open as a Krush Burger. While the kitchen has already been built out, the branding isn't up yet, and the space doesn't have the same look and feel of the Krush Burger at the State Lottery building.

Krush Burger can be found online at KrushBurger.com.

Oak Park brewery, restaurant eyes 2014 opening - The Oak Park Brewing Co. and The Thirsty Fork restaurant are on track to open on Broadway early next year. Christopher Davis-Murai will run the restaurant side of the business with seating for 50 inside and seating for 70 outside of the 3,400-square-foot brick building at 3514 Broadway. Davis-Murai is a seasoned personal chef and was the guy behind the Bicycle Chef in midtown and East Sacramento. Mark Anderson in Sac Biz Journal.

Sorry Folks, Bandera is Still the Best Burger in Town - I know it’s a chain. I know the drinks are too expensive. I know you can’t go there without getting hit on by some geriatric divorcee or Persian car dealer. I know. I know all of these things. It doesn’t make the burger taste any worse. It is a perfect burger. On The Sac Rag.

First Impressions: Lou’s Sushi on P Street - He’s humble. He’s hungry. And he’s gifted. Just ask the legion of followers who have been watching social media with interest as Valente was making the transition from sushi chef at Zen Sushi on 15th Street to owner/sushi chef at Lou’s Sushi on P Street. Clearly, Valente has cachet and star potential. How much does he love and respect the craft? He was moved to tears watching “Jiro Dreams of Sushi.” Blair Anthony Robertson in the Sac Bee.

Capital Dime serves fancy, affordable dishes - Executive chef Ruben Perez described his favorite dishes. “Clams chorizo is a delicious dish,” Perez said. “It’s a seafood stocked base sauce with a chorizo twist to give it a little spice. We wanted to give it a southern kick.” As well as the clams, the dinner plate “Noodles in a Green Dress” caught Perez’s eye. “Personally, I like pesto and ours is different because it does not have nuts. It’s an antique recipe from Italy,” Perez said. Kaitlin Bruce in the Sac State Hornet.

VIDEO: Dishin' With Tina: Baguettes - Sandwiches made with fresh bread, home-made chili sauce and dessert! Lunch doesn't get any better than that. Tina Macuha stops by a family restaurant, in Elk Grove in today's "Dishin' with Tina." On Good Day Sac.