Dining News: Where to Find the Best Korean Food on the Grid 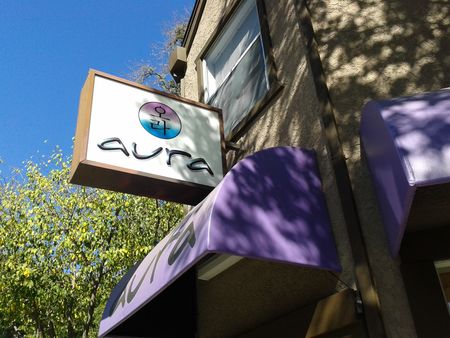 Cowtown Eats first wrote about Aura Korean & Japanese Restaurant replacing Momiji at 14th & G back in July. Last week, I paid the new restaurant a lunch visit, and I'm ready to declare the place the best Korean food on The Grid.

Now, granted, there isn't a lot of competition. Tako Korean BBQ at Alhambra & T serves Korean fusion, and Bento Box at 16th & K serves some Korean dishes, but neither of tries to be a Korean restaurant.

But the statement still stands. Aura has the best Korean food I've had on The Grid.

My dining companion and I decided to do a strictly Korean dish, and a more Americanized entree. 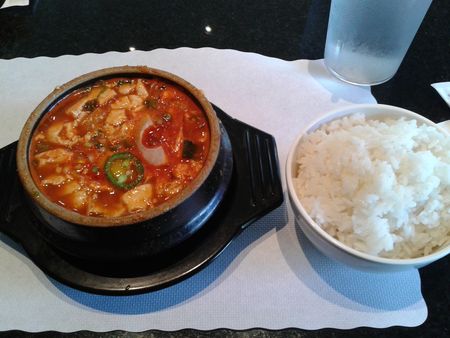 I ordered the spicy tofu soup. I'm kind of a wimp when it comes to spicy dishes, so I ordered it medium. It was a great bowl of lunch on a cool day. The flavors were nuanced, it came with pricey proteins like shrimp, and generally blew both of us away. 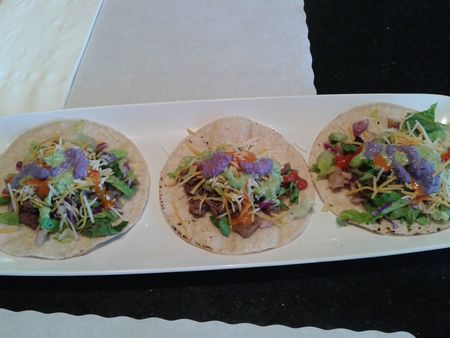 My lunch pal decided to order the Korean tacos. When we both tried one, we decided they were at least as good as the ones at Tako Korean BBQ (which we both love), if not better.

I also enjoyed the mom-and-pop vibe of the place. You can tell the place isn't the slickest, but they're trying hard to satisfy their customers. We were in and out of the place in less than an hour - perfect for a midday meal during the work week.

The menu includes many dishes I've seen at other Korean restaurants like Bi Bim Bap and seafood pancakes. I can't wait to go back, and soon. I don't think I'll need to drive out to Bradshaw to get my Korean food fix.

I hope the owners recognize that serving Korean food makes them unique and that they'll take even more steps to deemphasize the Japanese part of their menu and concentrate on continuing to make the Korean part great.

Aura Korean & Japanese food is located at 14th & G. They don't have a Web site, but you can check out their Yelp page. The server also informed us they deliver.

Ramen & Rice: Dreaming of bibimbap - On the Korean side, the bibimbap restored my faith in the dish, which I had recently sworn off. Typically, this is never as good as I want it to be, and I can never put my finger on why. Order it with the brown rice, which imparts a delightful nutty flavor. The sliced mushrooms add to the umami of this dish, and the shoyu, mustard and spicy sauces that come on the side should all be used liberally. The final bites are the best—the rice gets crispy at the bottom of the sizzling bowl. Why can’t I order a bowl of just that? A side of kimchee was served lightly spicy, and a steaming platter of bulgogi arrived sweet and tender. Becky Gruenwald in Sac News & Review.

Save Your Money, Skip the Pocket Bistro - If there ever was a restaurant that needed a Gordon Ramsay-type intervention, it would be Pocket Bistro. On a recent Sunday morning, I met up with a friend and her two adorable, well-behaved children for a brunch there. What followed was one of the more crappier dining experiences of 2013 for me. This wasn't a restaurant I planned to review, but after the sub par food and the even worse service we experienced, well, I just can't keep my mouth shut. Ally Gaffan on A Girl and Her Fork.

Jazz club planned for Old Sac - A Rancho Cordova man is getting permits to open a new music venue — dubbed City Lights Jazz Cafe & Night Club — in Old Sacramento. The space is the three-story historic structure at 910 Second St., which was most recently Vega’s Night Club & Sports Bar, which was open for about a decade. Mark Anderson in Sac Biz Journal.

You Say Good-Bye, I Say Hello - And while some columnists like to wax poetic about the closing of this or that marking the “beginning of the end” for INSERT neighborhood, we take a different outlook. Yes, we’re sad to lose any business that becomes a local institution, but it can also pave the way for something entirely new and awesome to become a member of our community (we’re looking at you: Hook & Ladder, Downtown & Vine, KBAR, Tank House BBQ, The Rind, Track 7 and LowBrau). On Girls on the Grid.

VIDEO: Food Truck - It's a food truck that serves up some unique grub that will leave you wanting more! Cody is outback checking out the Cichy Co. Food truck! On Good Day Sac Part 1 | Part 2.