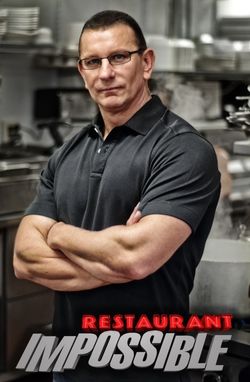 Murphys is approximately 1 hour, 45 minutes from downtown Sacramento by car, east of Stockton near Angeles Camp.

According to the Enterprise story, it appears that one of the ways they hit that low dollar amount is by seeking volunteers to "paint, craft, construct, remodel, clean and decorate the restaurant."

Read the entire story in the Calaveras Enterprise.

I called the restaurant on Sunday morning, and they confirmed that the restaurant was spruced up on Monday, Tuesday and Wednesday of this past week. They say they're open for business, but can't discuss the episode or allow pictures to be taken until 5 days after the show airs.

Late last week, there was some online speculation that Irvine was shooting at a Sacramento restaurant. Irvine himself told the Tahoe Tribune on Monday that "I’m in Sacramento. I was in Orlando this morning. Before Tahoe, I’ve got to film an episode of “Restaurant: Impossible” for the next two days..." All of that conjecture turned out to be false.

As of now, the episode featuring Hillbillies is scheduled to air in January.

Try It: Paragary’s Roasted Shishito Peppers - Paragary’s Bar and Oven makes a version that really makes my socks go up and down—the peppers are roasted, then enlivened with fresh lemon juice, coriander and lemon butter. Crackly on the outside, soft and deliciously pungent on the inside, the peppers are an excellent, racy nibble guaranteed to perk up tired taste buds. Kira O'Donnell in Sac Mag.

Stirling Bridges Restaurant and Pub: A spicy playfulness - Stirling Bridges Restaurant and Pub seems to be filling a void left by Brother Oliver’s 2008 closure. Families gather for meals, elderly couples come on dates, and younger 20-somethings come en masse to watch football games, drink, and play pool and darts. Its diverse menu reflects not only the traditional “plain and robust” ethos of British food, but also the spicy playfulness of a modern gastropub. Jonathan Mendick in Sac News & Review.

Mobile milk and cookies aim to sweeten up late nights - Cookies and Milk delivers warm and freshly baked cookies to people within the East Sacramento area, satisfying any sweet tooth cravings during the late hours of the night. Founder Will Countryman started this cookie delivery business in February, and thought that delivering cookies and milk to doorsteps would be a cool concept. Sammie Moreno in the Sac State Hornet.

Counter Culture: Tori’s Place is a soul food find - Tori’s Place doesn’t look like much. The soul food restaurant is housed in a little wood building painted vivid violet – a step up from being a shack, really — across the street from the Grant High School football field. The only seating is outside at five tables, with another table in a shaded area on the side. On our visit, a lone stereo speaker blasted R&B music by Maze from its (loud) concert at the Saenger Theatre in New Orleans. Do not, however, let appearances fool you. The sign out front promising “home cooking” delivers in a big way: excellent from-scratch fried chicken, gumbo and fish, and outstanding side dishes. Portions are hefty, prices are fair ($1.50 to $12.50), the ingredients fresh. Allen Pierloni in the Sac Bee.

VIDEO: Group supports return of downtown public market - Once a part of Sacramento's core in downtown, a group is hoping to revive public markets, where vendors gather under one roof to offer an array of products, like groceries, desserts, produce and other local goods. On KCRA.