Dining News: How Foundation Owners Went from 'Screw You' to a New Restaurant 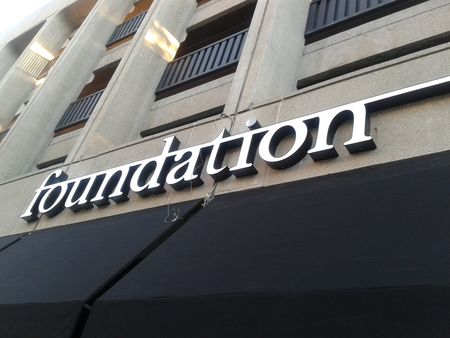 While I haven't had the chance to check out Foundation yet, the restaurant that replaced 4th Street Grill, I've heard a lot of good buzz about the place. But to get up and running, the new restaurant had its share of challenges. Here's just a taste of it, from Douglas Curley in Comstocks Mag.

To fulfill their vision, Sin and White would endure more than 12 months of on-again, off-again negotiations with Ron Fleming, the owner of Fourth Street Bar & Grille; and the landlord of 455 Capitol Mall, the building in which the business resides. At times, they would alternatively feel strung along, disrespected and at one point outright “screwed...”

With business plan and finances in place, they handed a proposal to Fleming and — they thought — to Dawson as well. According to Jennifer Hayer, administrator and tenant relations manager at 455 Capitol Mall, Dawson and Monterey & Great Pacific Corp. were not made aware of the Sin/White interest until after the untimely death of the buyer Fleming was pursuing. That was in January 2013. Unaware of the circumstances leading to the deal’s failure, Sin and White offered Fleming a new deal — one nearly identical to the deal he had agreed to with the other party...

Fleming said it wasn’t that easy to transition from one party to the other.

“On the day I was set to sign the final papers on the sale of Fourth Street, I got the word that the individual who was going to buy it from me had just killed himself,” Fleming says. “It was a shock to say the least and really set back my plans for the sale.”

From February to June, Sin and White negotiated with Fleming while he carried out a good-faith, month-to-month lease with Dawson. After months of fruitless go-round, Fleming told them no. Period.

Esquire Grill's executive chef wants to make foodies - Expect the fall menu next week, and expect Ostrander’s finer-dining plans to roll out in a few months. Listen as the wheels turn inside the head of a chef who clearly relishes the “serious logistical thinking” big plans require. “We all agree there's a lot of well-executed food in this town,” Ostrander said, “but I don't think anyone's pushing boundaries for everyday people -- people who aren't foodies but who want to be wowed at dinnertime. We want to make foodies out of the people who aren't foodies.” That includes touches such as tableside preparations that put the chef on stage before his diners, honing his crew’s technical skills and perhaps pouring lunchtime craft cocktails for “a drinking crowd that wants to experience food in a fun way.” Ed Murrieta in the Sac Biz Journal.

Local bar gets the party started for college students - Barwest provides a fun atmosphere for all types of people, but the typical demographic attracted is the college crowd at Sacramento State. Barwest plays into the “Animal House” idea by appealing to college students by giving them what they want: high alcohol-content drinks, greasy and inexpensive food, loud fist-pumping music, beautiful girls dancing on top of furniture, and sports on high definition screens. Kaitlin Sansenbach in the Sac State Hornet.

Dining review: Two Indian restaurants in Folsom - This unassuming shopping mall obviously targets the transplants from India who have given Folsom an infusion of old-world culture over the past decade. When it comes to the food, we all benefit. Neither Mylapore nor Chaatney will blow you away, but their offerings will give you a clear sense of the quick, easy and informal way of eating in India, be it in the south or the north. Blair Anthony Robertson in the Sac Bee.

The Weakening Better Burger Business - The better burger trend has peaked. For the latest evidence, look no further than Plano, Texas, where Mooyah Burgers & Fries ousted its CEO, Bill Spae, less than a year after luring him away from CiCi's. According to Nations Restaurant News, the ouster came amid concerns from franchisees about improving operations. It also comes as the company looks to improve its menu and reduce its food and paper costs. We've been told that some of Mooyah's units have suffered from steep sales declines this year. Jonathan Maze in Restaurant Finance Monitor.

VIDEO: Dishin' With Tina: Roundhouse Deli - A building that once housed locomotives, is now serving-up some of the best dishes you've ever tasted. Tina Macuha makes a stop in Roseville,  in today's Dishin' with Tina. On Good Day Sac.