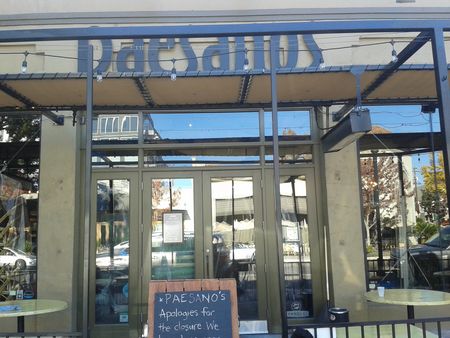 Paesanos Midtown closed temporarily on Monday, Nov. 11 for a modest face lift and is scheduled to reopen tomorrow, owner Mark Scribner said in an interview on Sunday.

The impetus for the closure was the need to install new flooring in the kitchen. While they were closed, they decided to get some other work done, including:

Scribner (whose parents own local winery Scibner Bend) said they decided to do the work now since there's a slight lull between the end of the summer and the holiday season. The last renovation of the space was done 12 years ago in 2001.

The menu will also get a small update with the addition of a few more pastas, pizzas and salads.

Fans of the restaurant don't need to worry - the character of restaurant they love should remain the same after it reopens tomorrow. It'll just be a little freshened up.

Sacramento Breweries - We’ve made a couple recent trips to the Sacramento area and visited 6 breweries. Here’s a rundown on what to expect at each one. Featuring Sudwerk, River City, Hoppy, New Helvetia, Track 7 and Rubicon. On Grubulub.

Biba Still Dazzles - But a recent meal at Biba reminded me that it can be very rewarding to re-visit some of our region’s well-established local restaurants. I took a friend who had never eaten at this venerable Sacramento dining institution, and our meal was a dazzler. Kira O'Donnell in Sac Mag.

A Dime’s Worth of Difference - In two trips to Capital Dime, I had only two dishes that I would call impressive: clams and chorizo and mac and cheese. The clams were amazingly flavorful, with the creamy bath they inhabited redolent of sherry and roasted garlic. The mac and cheese kicked major butt thanks to a hearty helping of pork belly. Greg Sabin in Inside Publications. (Second item.)

Stage Coach- Grease, Grits, and Cultural Exchange - Some mornings, breakfast is the only solution for what ails you. And a very specific breakfast at that, one with potatoes, biscuits, eggs, and all the other fixin’s. But, every now and then, you need to go farther. You need a gut bomb that feels like it was especially prepared by Paula Deen’s grandma, you know the one that thought the rotund racist was “too skinny” and kept inducing her to eat sticks of butter like they were popsicles. On those mornings, you go to the Stage Coach. On The Sac Rag.