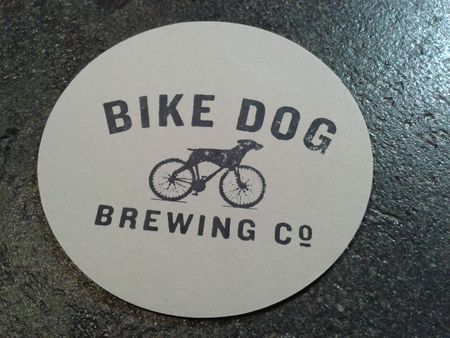 After their very successful grand opening last month, West Sac's Bike Dog Brewing Company is reinvesting their income into the business by adding seating, beers on tap and brewing capacity.

Here's a snippet from the e-mail announcement they made:

Running that low on beer was never the design of course, but with a small system--only four fermentors and one brite tank (what you carbonate in) --and lots of sales, it was the unexpected reality. There is a pretty easy solution though: spend some money on more tanks. And that’s exactly what we’ve done.

The day after the grand opening we ordered a second brite tank, because at the time that was our production bottleneck. We lucked out and it was in stock, so it’s already in use and helping us catch up. Once we had that, though, we realized we could really use two additional fermentors, but the ones we were using were backordered for three months. Instead we decided to upgrade to a double-sized stainless fermentor that should be here in mid January. While that doesn’t help us right now, we are giddy thinking about having a stainless tank with some bells and whistles to make more beer in soon.

So what have we done in the mean time to make sure we can get 5+ beers on tap and start introducing some new beers? Well, we asked our industry friends for a little help, and Rubicon was happy to step up. Because they have a sweet second facility up and running now in West Sacramento, they had an empty tank at their midtown brewpub and they offered to make a batch of our IPA for us. For us? Well, really more like with us, but on their equipment. Head Brewer/Co-Owner Pete and I had the pleasure of helping to make the batch, and everything went great. Since we used our ingredients, hit all of our numbers and were so hands-on, we are confident that it will taste just as amazing as the IPA we’ve been making on our own brewhouse.

Papa Dale’s and Starlite Lounge will go their separate ways - Now word comes that Papa Dale’s will pull out of the Starlite at the end of the month...What’s next? “In January, the truck (named Lucy) is going to Stockton to be rebranded with French 25 as Papa Dale’s French Quarter, and will run out of French 25,” Breedlove said. “We’ll still be on the road and the stuff people loved from Papa Dale’s will still be there, but we’ll add some of the dishes from French 25, as well.” Allen Pierleoni in the Sac Bee.

A requiem for Futami Restaurant - A boulevard of broken restaurant dreams unfurls while driving down this stretch of south Sacramento. In this case it’s Freeport Boulevard, between Florin Road and Sutterville Road, where a once thriving A&W was torched by an arsonist in 2006 and remains a sullen, fenced off lot ... Where the Zombie Hut served Hawaiian food and giant cockatils served “Fantasy Island” style in hollowed out pineapples ... where the memory of a plane crashing into Farrell’s Ice Cream Parlour in 1972 still makes Sacramentans shudder ... where generations feasted on chicken and rib platters at El Chico’s. Chris Macias in the Sac Bee.

He’s a singer, she’s a bartender; now they’re also owners of Blue Lamp - Vocalist Ben Garcia spent years playing clubs with the hardcore punk band Hoods and other groups. His wife, Gabriell Garcia, managed and tended bars at such local favorites as The Limelight and Streets of London Pub. They teamed up in October to buy and manage The Blue Lamp at 1400 Alhambra Blvd. in Sacramento. “I’m doing the bar and the books and all that,” said Gabriell Garcia. “Ben’s really working on booking the music and working with the bands and making sure the band hospitality and all that goes well. … We just really hope we can make it like a nice, comfortable neighborhood bar and bring really great music to Sacramento.” Cathie Anderson in the Sac Bee.