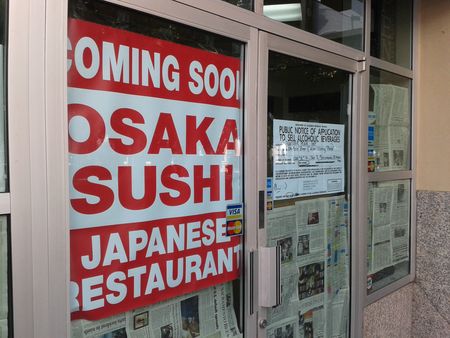 Osaka Sushi Japanese Restaurant at 1200 K St., Suite 7, took over the space that formally housed Magnolia Grill, which closed earlier this year...[Owner Kevin] Ho says the restaurant, which can seat up to 80 people, will be open daily with tentative hours of 11 a.m.-2 p.m. for lunch and 5-9 p.m. for dinner.

Local Baker Offers Cronut™-like Pastry - Eli Frank ,who owns Rustic Grains Bakery in Roseville, is now offering his own version of a Cronut™, called a “Boundi.” Offered in several varieties – including cinnamon-sugar, custard-filled and chocolate-topped – the Boundis are, according to a staff member, selling like, er…hotcakes. Kira O'Donnell in Sac Mag.

On National French Toast Day, Five Local Faves - As if having Thanksgiving fall on Hannukah isn't enough of a cosmic coincidence for one day, today is also National French Toast Day. In honor of this esteemed holiday, we offer up a few of our favorite French toast options around the region. Featuring Tower Cafe, Ettore's, Four Sisters Cafe, deVere's Irish Pub and Monticello. In Sactown Mag.

One Block, Two Winners: A New Mexican Restaurant - Chef Ramiro Alarcon, most recently of Tequila Museo Mayahuel, has rolled the dice in the hope that the old KFC can be reborn as a home to what he calls “Mexican gastronomy.” His new enterprise, Cielito Lindo Mexican Gastronomy, is a quiet, low-key restaurant where the food is the star. Blending modern execution with quality ingredients and traditional, regional Mexican recipes, Alarcon is betting that the surrounding neighborhood will support a more elegant Mexican dining experience than that of California Burrito and its ilk. Most of his offerings are beautiful and stimulating. Croquettes of crab and chorizo are especially indulgent, rich and satisfying. Ceviche hits the mark as a light and tasty appetizer. Greg Sabin in Inside Publications.

VIDEO: Papa Dale's - Papa Dale's Drivin' Diner is showing off their Thanksgiving inspired dishes on wheels in the Good Day parking lot! They will show you how to turn turkey left overs into delicious meals. On Good Day Sac.