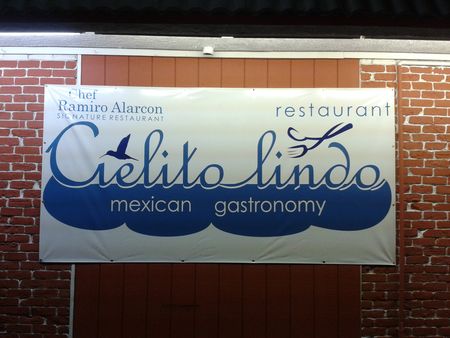 Cielito Lindo, a new mexican restaurant in East Sac, got a thumbs up for its cooking, but a thumbs down for its decor in the Sac Bee from restaurant critic Blair Anthony Robertson.

The disparity for Cielito Lindo makes for an awkward juxtaposition — fine food served by waiters wearing vests and neckties in a space that lacks warmth or style and is a tad chintzy looking. Oh, and I might as well mention drafty, at least for now, especially since one of the female staffers made the rounds in the dining room wearing a puffed-up parka on a modestly frigid night recently...

Thus, the best we can say about this restaurant is that it makes an appealing addition to the east Sacramento culinary scene, a neighborhood eatery with food that will often satisfy, sometimes wow and, yes, occasionally let you down.

Robertson also mentions in his review that they had yet to get a liquor license. When I visited in October, they said they were about to get one. Three months later, I guess they don't have one yet.

Read my thoughts on Cielito Lindo from an October post just after they had opened.

Taylor's Kitchen Still Delights - As Sacramento’s food landscape continues to blossom and grow, it’s easy to forget well-established restaurants as we continually run to try new eateries. But I was reminded of how wonderful some of our enduring neighborhood restaurants are last night when I visited Taylor’s Kitchen, Land Park’s well-loved dining treasure. Kira O'Donnell in Sac Mag.

Hand signals help restaurant servers communicate - Be flattered if you catch the general manager of BLT Steak in downtown Washington flashing a quick, sideways peace sign as he seats your party. Adam Sanders isn’t revealing his politics; he’s simply making a “V” — and alerting his staff to the presence of a VIP. Tom Sietsema in the Washington Post.

VIDEO: The Melt Opens In Davis - A restaurant specializing in grilled cheese sandwiches opens in Davis. On CBS 13.