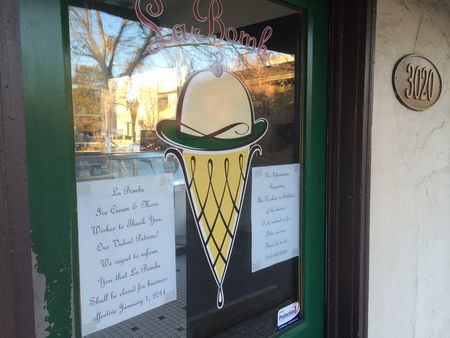 The ice cream shop, which opened about 18 months ago, was selected by the Sac Bee as one of the top 10 frozen treats around Sacramento in July 2012. Upon closing, it left these signs on the door.

La Bombe Ice Cream & More wishes to thank you, our valued patrons! We regret to inform you that La Bombe shall be closed for business effective January 1, 2014.

For Information regarding the purchase or sublease of the business or to contact us for other reasons, please do so at: 916-448-2334.

I placed a call to that number on Monday evening, but there was no answer.

La Bombe was owned by the ex-wife of the owner of midtown's Aioli.

A shop whose description closely matched La Bombe is listed on the Restaurant Exchange Web site for $50,000.

I hope something new and interesting fills that void soon.

VIDEO: Wrap it in bacon and call it a festival - Sacramento kicked off its annual "Bacon Fest" Sunday night at the Grange Restaurant & Bar, which runs until Jan. 26. Several downtown eateries are taking part in this event including Hook & Ladder and chef Brian Mizner. On KCRA.

AUDIO: Live Line: Bacon Fest (Revolution Wine) - Just ignore your new year's diet and fitness resolution for the next few minutes because Bacon Fest is back in Sacramento! The very popular food fest of all things bacon and pork is returning for its third year, with participating restaurants conjuring up special menus featuring sizzling bacon dishes. Rachel Kelly, chef from festival participant Revolution Wines, joined Mike Simpson in studio to chat. On KFBK.

VIDEO: Bacon Fest In Sacramento - If football and guacamole weren't enough, Bacon Fest might fill you up.  Amy's checking out the dishes being served-up at "Hook and Ladder" and "Golden Bear." On Good Day Sac.

Niners Lose, But Local Restaurants Win - Dickey’s BBQ Pit in Midtown did not see as many diners inside their stores, compared to the large number of online and catering orders. “My Elk Grove store ran out of ribs,” Angela Donegan, General Manager of Dickey’s BBQ Pit said. “They had to come here and borrow some from me, and I ran out of Mac and Cheese, so I had to go borrow some from them. So we were playing musical chairs, back and forth.” Rina Nakano on FOX 40.