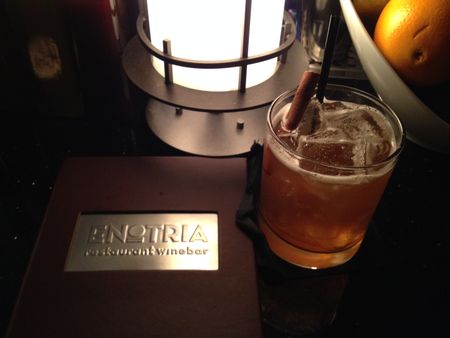 Effective today, Enotria Restaurant and Wine Bar has closed for business. Enotria has been a landmark in the Sacramento community for 17 years and Mr. David Hardie the owner, wishes to thank all the patrons, current staff and former employees for what has been an enjoyable run.

Mr. Hardie made this decision after finding it increasingly difficult to provide the guidance of ownership from a distance, as he is a resident of Nevada. Mr. Hardie owns the property and now wants to explore opportunities as a landlord.

Mr. Hardie is very proud of the cuisine, service and experience that Executive Chef Pajo Bruich and General Manager Jenny Yun provided to the guests of Enotria and wish them both well with their future endeavors.

“It is with a heavy heart that this decision has been made. I am extremely proud of what was created here, the efforts and commitment of all that were put forth, and the level at which we executed. Thank you to all of our loyal and loving guests, my team, and to Mr. Hardie for his support and belief in my vision.” Pajo Bruich

The Sac Bee reports that the staff, which were actively planning to participate in Bacon Week festivities next week, were surprised by the move.

Bruich hopes to stay in Sacramento, with a goal of owning his own restaurant. Ideally he’d like to keep his kitchen staff, and has also eyed two possible locations. Bruich already has one investor lined up and seeking more for a new restaurant project.

“Enotria was something I was extremely proud of and we built a fantastic program,” said Bruich. “I thank David for putting his trust in me and guiding me. I’d always felt super secure with Enotria and I don’t know exactly what changed. In the meantime, I have to get to work and find a new home as a chef.”

The Sac Bee also collects reactions from neighbors, neighborhood businesses and activists and politicians to the abrupt closure of Enotria.

My biggest fear is that Sacramento loses the talented Chef Bruich and the crew that he's assembled to a larger city like San Francisco.

I last ate at Enotria on Chef Bruich's birthday in December where he served small Mexican plates. The food was fantastic, but unfortunately, it was another night where (except for the bar area where the special event was held), the restaurant seemed kind of dead. I don't know that a lack of businesses contributed to its closure, but the restaurant never seemed to catch fire.

I hope the chef and his team stick around and find a concept, venue and price point that Sacramento can support.

Will Sacramento's culinary stars actually have to wear rubber gloves? - Your next handcrafted cocktail might be a cocktail crafted by hands in gloves, according to a new food safety law. How romantic. An update to the California Retail Food Code bans bare hands in food preparation. That means cooks and bartenders alike need to wear gloves—or use utensils—to separate their germs from customers’ meals. Janelle Bitker in Sac News & Review.

Sacramento’s Assfire erupts in Marin, SF, and Beyond - While working as a photographer in area kitchens I began to notice unlabeled hot sauce that would appear during family meal in various establishments. Over time I was introduced to Assfire: at that time; origin unknown. What I did know was that the hot sauce was out of my league. From time to time I would delicately place a pin drop of the sauce on a chip or chicharron just to remind myself of my own mortality. The burn is substantial and unrelenting (yet strangely addictive). Ryan Donahue in Sac Foodways.

Bacon Fest helps fill lull and stomachs during January - Sacramento restaurateurs are getting mileage out of events and promotions such as Dine Downtown Restaurant Week and Sacramento Bacon Fest that are keeping the kitchens busy in January. In the restaurant business, January is notorious for being a slow month, probably because it follows the excesses of the holidays and all those New Year’s resolutions. Mark Anderson in the Sac Biz Journal.

Attorney: Icing on the Cupcake still working on staying open - Icing on the Cupcake is “still having meaningful discussions about trying to possibly stay open,” according to the attorney handling bankruptcy proceedings for the local cupcake chain. Sonya Sorich in the Sac Biz Journal.

VIDEO: Dunkin' Donuts In Sacramento - An East Coast favorite, Dunkin' Donuts is looking to expand in our area. They are looking for people to be franchise owners in El Dorado, Placer, Solano and San Joaquin Counties. Cambi Brown on Good Day Sac.