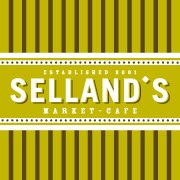 Selland's Market Cafe on H Street closed on Jan. 1 for a weeklong "minor remodel," Selland's announced via their e-mail newsletter. They plan to reopen on Tuesday, Jan. 8.

I checked in with Selland Group marketing manager Gina Funk Nelson to see what the "minor remodel" would entail.

"We're doing mostly a 'facelift' of new paint, replacing the ceiling, replacing some counters, a deep clean and some sprucing up," e-mailed Nelson. "Nothing major, but with how the pace of work can sometimes drag depending on surprises we thought it best to close for the 6 days."

She also joked that Sellands Market Cafe wanted to "look our best for Bacon Fest."

While we're on the topic of restaurants that are closing for short periods of time in early January, Vic's Ice Cream announced on Twitter that they too would be closed for cleaning.

Hope everyone is having a fun and safe start to the new year! We will be closed for our new year cleaning today and will reopen on Jan 6.

Finally, Enotria announced that they too would be closed from Jan. 1 to Jan. 9 for "winter holiday." They plan to reopen on Jan. 10.

Dining: The Sacramento area’s best servers - Great servers can be the most powerful people in a restaurant, for they are the direct link between the kitchen and the customer. They are in the business of serving. They are in sales. They are explainers, advisers, observers, amateur psychologists, problem solvers, masters of timing and, beyond all that, they know how to put on a show. When they step into the dining room, they are in their element, bringing to bear their commitment and passion for executing at the highest level. They can be witty, charismatic, intuitive, serious or solemn, but they are never dull, and they are always on. Featuring servers from Blackbird, Kru, Hook & Ladder, Formoli's Bistro, Juno's Kitchen and Jamie's Broadway Grille. Blair Anthony Robertson in the Sac Bee.

First Impressions: Dad’s Kitchen brings brew to Fair Oaks - After seeing Guy Fieri’s over-the-top review on “Diners, Drive-Ins and Dives,” and after enjoying the signature Dad’s Burger earlier this year, we expected better. We ate the light and crunchy deep-fried garbanzo beans by the handfuls. The ramekin of mac ’n’ cheese with bacon looked great, but lacked depth. “I like the crust, but where’s the sharp cheese taste?” one pal said...Let’s say the kitchen is still coming together. Allen Pierleoni in the Sac Bee.

El Forastero Mexican Food: Cheap, tasty and very Californian - El Forastero certainly lives up to its name, because its food tastes like it comes from another place—namely, Southern California. The fast-food booth seating, the prices, the 24-hour drive-thru and the cuisine all make me feel like I’ve finished a six-hour journey down Interstate 5 instead of a five-minute drive down the street. Jonathan Mendick in Sac News & Review.

Recipe: Put Feather in Cap, Call It Macaroni, Add Cheese: Cookbooks on the American Favorite Sell Big; Authors Use Noodles, Write More of Them - If you want to learn how to make macaroni and cheese, and who doesn't, look no further than "The Mac + Cheese Cookbook," recently out from Ten Speed Press. Or thumb through a competitor, "Melt: The Art of Macaroni and Cheese," an October release from Little, Brown & Co. Katy McLaughlin in the WSJ.

AUDIO: Live Line: Friday Food - Ettore's - The holiday season is the time for baking and enjoying baked goods and some of the best in Sacramento are made at Ettore's European Bakery and Restaurant.  From yule logs to traditional Christmas cookies, Ettore's is perfect if you want that special treat or a gift to bring to a holiday gathering. On KFBK.