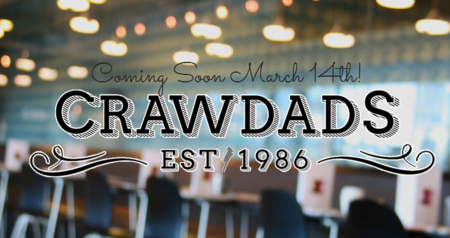 Originally opened in 1986, the restaurant changed hands recently, and the new team originally hoped to open by March 1. It now appears the opening date has slipped by a couple weeks - a very common occurrence among new restaurants.

A Cowtown Eats source has been to the restaurant as they've fine tuned their recipes, and I'm hearing great things. Joining Chef Pechal to oversee the kitchen is Paul Caravelli, a fellow contestant on the first season of ABC's The Taste. Word is that he's a dessert specialist, and will work well to compliment Chef Pechal.

French cuisine coming to K Street - The new business, to be called Brasserie Capitale, will be owned and operated by the owners of Aioli, the tapas restaurant on L Street in midtown that will celebrate its 20th anniversary later this year. While full details are still in the works, the chef will be Christophe Cornet, a classically trained French chef from the Bordeaux region who has experience at a Michelin two-star restaurant in France and was the private chef for the Maloof brothers, the former owners of the Sacramento Kings. Blair Anthony Robertson in the Sac Bee.

Farms, Food and Film: Sellands to serve spaghetti and a movie during film festival - This month, Nelson and the Selland’s team bring one of the featured events of the Sacramento Food Film Festival to East Sacramento. On Friday, March 28, from 6 to 9 p.m., they will host Family Night: Spaghetti Dinner and a Movie in the Grand Hall at Clunie Community Center in McKinley Park. The featured film will be “Cloudy With a Chance of Meatballs.” Inspired by a children’s book, the animated movie focuses on a town where food falls from the sky like rain. Lisa Schmidt on Inside East Sac.

Try It: de Vere's Bloody Mary - Feeling glum and lethargic on a gray, drizzly Sunday morning? Belly up to the bar at de Vere’s in midtown and order up a spicy Bloody Mary—it’s guaranteed to catapult you into a feistier, more energetic mood. Kira O'Donnell in Sac Mag.

VIDEO: Soup is on, fill the bowl - The 11th annual "Empty Bowls" event takes place March 10th and 11th and will be held at the Convention Center in downtown Sacramento featuring chef from Cafe Bernardo. On KCRA.