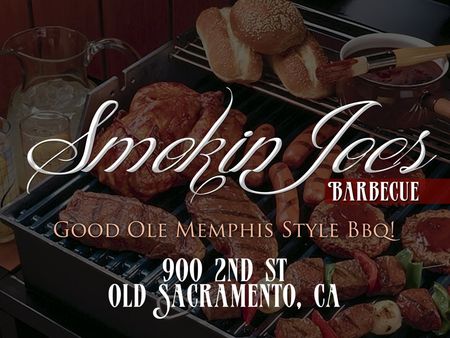 Smokin Joe's BBQ held its soft opening over the weekend in Old Sacramento.

Per its Web site:

Whether from Tennessee, Texas, Georgia, Louisiana, or the Carolinas, southern BBQ is the sweetest and most sultry taste around. Complete with all the fixins, our southern comfort food is sure to satisfy any appetite. Our recipes have been gathered over six generations and across three families with strong roots in the south and its tradition of BBQ and soul food. Bring the whole family and experience our down home cookin for yourself. You'll never forget your first time! You'll be back for more.

The most recent restaurant to occupy that space was Harvey House, a restaurant that closed in Aug. 2012.

An after hours call Monday evening to the phone number listed on the Web site was not answered.

I haven't had the chance to give the restaurant a try, but I'm hopeful they hold out long enough to start getting business from the new Arena.

Smokin' Joe's BBQ is located at 900 2nd St. and can be found online at http://www.smokinjoesbbqmemphisstyle.com/.

The Cheese Stands Alone - Since its inception, The Cultured and The Cured has grabbed Sacramento’s gastronomic attention with its tightly edited selection of fine cheese, charcuterie, beer, wine, specialty dry goods and a small menu you can enjoy in one of the shop’s 10 seats. (They have plans to expand seating to a patio outside.) Having a party and trying to pick the hors d’oeuvres? Ask Hillman. Hosting a dinner and want to know what pairs well with your wine? Ask Hillman. Want to find out what that cheese on the left tastes like? Ask Hillman and he’ll cut some right off the wheel. Jessica Laskey in Inside Publications.

California Fitness wants to serve beer and wine downtown - If everything goes as planned, the new California Family Fitness club downtown will have a beer and wine license. The news might seem to contradict the role of a traditional health club, but the chain's president says the option is part of an effort to establish a community beyond the monotony of treadmills. Sonya Sorich in Sac Biz Journal.

3 Sacramento Croissant/Donut Hybrids to Satisfy Your Cronut Jones - You know those mornings when your sweet tooth is telling you to have a donut for breakfast, but your classy side says a croissant would be more continental? Well Dominique Ansel MacGuyver’d the hell out of that problem last year when he created the Cronut® (yes, it’s actually a registered trademark…I hope this article isn’t dry snitching on the local takes on his inspired dessert). Since he’s in New York and we’re in Sacramento, here are three local cronut-like objects to satisfy your ambivalent breakfast desires. Featuring Sweet Dozen, Southern Maid Donuts and Bakers Donuts. Rodney Blackwell in Sac Foodways.

Colfax pizza restaurant expanding to Rocklin, Loomis - A wood-fired pizza restaurant founded in Colfax is adding locations in Rocklin and Loomis. Il Pizzaiolo expects to open a 1,230-square-food restaurant at 6696 Lonetree Blvd. in Rocklin in early May. The upcoming Loomis location at 3640 Taylor Road spans 1,500 square feet and is scheduled to open in early June. Sonya Sorich in the Sac Biz Journal.

VIDEO: Croissant Bread Pudding - Mimi’s Cafe whips up their croissant bread pudding for Paul Robins and the rest of the FOX40 morning crew to sample. On FOX 40.

VIDEO: What's For Breakfast: Crepe Escape - Cambi Brown is at Crepe Escape getting down with some delicious breakfast treats!  On Good Day Sac.