Dining News: 'One of the Best Burgers in Sac' at Fieldhouse 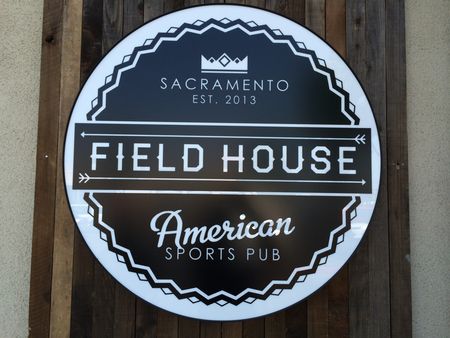 Fieldhouse American Sports Pub, which opened in Early March and replaced Mandango in Arden, is starting to get a little positive buzz.

Maybe that shouldn't be a suprise since the new sports bar has its food and drink program handled by people behind Shady Lady. Here's an early review, via Submerge Mag:

So there we sat, happy campers, with a five-plate spread before us, showcasing every color of the rainbow and bestowing a wealth of amazing flavors on our eager taste buds. Those sitting at the bar around us had to ask why two svelte women such as ourselves were so damn hungry.

The half-pound Whiskey Burger elicited an, “Oh dang.” This is quite possibly one of the best burgers in Sacramento. Served on newsprint food service paper with black peppercorn fries, the Whiskey Burger comes on a toasted bun with spicy, bitter arugula; bacon on point in the shape of a stiff ‘X’; a whiskey-soaked patty of local ground beef; and cheddar cheese that melts and flows like lava over the whole masterpiece...

Stuffed to the gills and smiling, I noticed that in spite of the recent opening, the place was already beginning to fill up with patrons. Origoni gratefully explains, “We have been warmly received by the community since opening and are continuing to see more new faces as word spreads.” Looks like another home run for the team at Shady Lady and their new partners.

Field House American Sports Pub is located at 1310 Fulton Ave, and can be found online at fieldhousesac.com.

First look: Midtown's Karma Brew - As for managing the food and drink, since he doesn’t have formal culinary training, he’s bringing in help. He says that friends who have experience in the restaurant industry will lend a hand. His target audience? People with a “champagne taste, and a beer budget.” After a few hours of talking with Sadeghi, it’s all still a bit unclear what exactly to expect from Karma Brew. But it looks like it’ll certainly have a unique environment with plenty of personality. Jonathan Mendick on Sac News & Review.

Munchable mash-up - When I think of California cuisine, I often think of the California roll, the Korean taco and the so-called Chinese chicken salad. Then, I immediately get angry that most Asian food has to be radically altered from its traditional recipe just to be deemed “acceptable” by the hegemonic American palate. Jonathan Mendick in Sac News & Review.

VIDEO: Republic Roll - Julissa Ortiz is with some of the Sacramento Republic FC soccer players at Mikuni to talk about their first home match this weekend. On Good Day Sac Part 1 | Part 2.