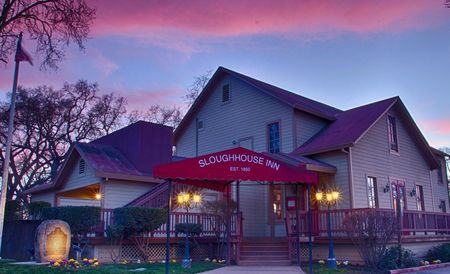 There's been a lot of discussion recently about whether some of Sac Bee resturant critic Blair Anthony Robertson's reviews come off as "mean-spirited." In a longer Comstocks Magazine piece about Sloughhouse Inn, the owners discussed their reaction to the review.

In late February, the food and service at the Inn was all but slain by Sacramento Bee restaurant reviewer Blair Robertson, who condemned the restaurant’s mass- market cuisine, “disappointing” beer selection and a forgetful waitress. As newcomers to a very tough industry, the Lees took the criticism personally.

“My wife was decimated at first,” George recalls. “She couldn’t understand why anybody would say such mean things about what we’re trying to achieve here. We think we’re providing good food and service to good people.”

But in the end, it was just another learning experience for the determined couple.

“I was pretty down at first,” Leah admits. “But then we started getting calls of support. Many calls. Business the next day was very good. Everyone was just wishing us the best and saying that we had their support. It made me cry.”

Read the entire Douglas Curley story in Comstocks Mag and here's the Sloughouse Inn review in the Sac Bee.

If you're looking to find evidence of a mean spirited review by Robertson, though, this probably isn't the most pursuasive case. In the Comstocks Mag article, the owners admit that "As part of its business strategy, Sloughhouse Inn employs no chef. George’s philosophy is to take a team approach, so he has a crew of cooks that develops the menu..." (Emphasis added.)

So maybe that's why Robertson found "sub-par food" and "a ho-hum menu" during his visits there.

Sloughouse Inn can be found at 12700 Meiss Rd, Sloughhouse, CA and online at http://www.thesloughhouseinn.net/.

Perfect place for barbecue minus the dive - Fahrenheit 250 took over Bisla's, a sports bar with plenty of paved parking surrounding the restaurant. Inside, the lights are low, the rooms are big, the seating is comfortable, the craft beer flows and the vibe is family friendly. The barbecue? I don't want to rush conclusions based on just two meals, but Fahrenheit 250's barbecue was some of the best barbecue I've eaten in recent memory. Ed Murrieta in Sac Biz Journal.

Cupcake chain adding second Roseville store - The owners of Smallcakes and Freshberry, a cupcake and yogurt shop in Roseville, are expanding their reach. Dan and Maria Casas-Murray expect to open an 826-square-foot store at 1090 Pleasant Grove Blvd., Suite 150, in early May. The west Roseville business, dubbed Smallcakes, will join the east Roseville store on Douglas Boulevard that the couple has owned since 2012. Sonya Sorich in Sac Biz Journal.

Taste of Fresno comes to the capital region with two restaurant chains - Embraced by diners in Fresno, two restaurant chains now are taking a bite of a bigger enchilada with new locations in the capital region. The sandwiches of Deli Delicious and the burgers from Colorado Grill have won “best of” honors from the Fresno chapter of the California Restaurant Association, Fresno magazine and in other contests. Mohammad and Zohreh Hobab acquired one Deli Delicious in 1995, and they and their children built the chain up to nine stores. Then people began asking them to sell franchises. In 2009 they did it, and there are now 20 franchisee-run Deli Delicious restaurants. Thirteen others are in the pipeline. Cathie Anderson in the Sac Bee.

Fahrenheit 250 opens its doors to Sacramento -  Fahrenheit has front and back patios that will be completed this month.The patios have full service so customers do not have to go inside to order more drinks. Monk described the service as being more approachable and helpful when it comes to suggesting food and drink pairings. “Typically a lot of barbecue places you go [to] you pull a menu out of a wooden pig head, order, get a number and you go sit,” Monk said. “Where as with this atmosphere,we have full service.” Erika Bradley in the Sac State Hornet.