Dining News: What Darrell Corti Thinks is Wrong With Italian Food in America 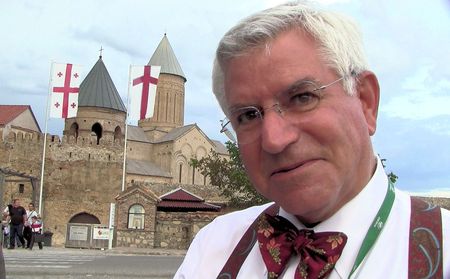 Darrell Corti may be Sacramento's foremost expert on food. He's probably forgotten more about food just this year than I'll ever hope to know.

In an interview with The Daily Meal, he gives his opinion on what's wrong with Italian food in America.

You grew up in an Italian-American household, have traveled extensively in Italy, and gained deep knowledge of Italian food and wine. What do you think Americans still don't understand about the way Italians eat and drink?

Americans still don't get the simplicity of it all! My Italian friends all want to know, "why do Americans abuse garlic so much?" It seems that Americans, especially young chefs, want to improve on a dish by adding more to it, when what it really wants is to be left alone (like in The Big Night) Sometimes it also seems that everything has to be partnered with something else: wines, additives like other seasonings. Most who go to Italy to work, return to sort of magnify in an "American" way what they learned. There are very few real Italian restaurants here since everyone wants his idea of Italian food to be the correct one. A big peeve is how to dress pasta. Americans like sauce with pasta, not pasta with sauce! I'm already in enough trouble answering this question!!

Before this interview, I knew that Corti (of the famed Corti Bros. store in East Sac) was an expert, but I never knew what his background was and how he continues to expand his knowledge. The Q and A is a short and quick read.

Read the entire interview in The Daily Meal.

SF Weekly recommends Sacramento's cocktail scene - The SF Weekly’s “drink of the week” column generally focuses on a single standout libation, or gives props to Bay Area bars with standout cocktail programs. But in the most recent case, the “drink of the week” went to an entire city - and that city is our own Sacramento. While giving the obligatory descriptor to Sacramento as a place to grab a quick bite on the way to Lake Tahoe, writer Lou Bustamante spotlights four Sacramento craft cocktail spots that are well worth an extended visit: Hook & Ladder, The Red Rabbit, Hock Farm and The Shady Lady Saloon. Chris Macias in the Sac Bee.

Midtown juice bar Peel'd coming to Roseville - A midtown juicery will open a Roseville location this month, inside a yoga studio. Peel'd, located in midtown's MARRS building, will have a juice bar inside Veera Yoga at 711 Pleasant Grove Blvd. in Roseville. A grand opening is scheduled for Saturday. Sonya Sorich in Sac Biz Journal.

Roseville Mikuni up for a refresh - The Mikuni Japanese Restaurant & Sushi Bar in Roseville is about to get a refresh, including new floors, booths, counter tops and decorations. The restaurant at 1565 Eureka Road will close for two weeks to allow for the work, closing the day before Easter and reopening for Cinco de Mayo. Mark Anderson in Sac Biz Journal.

Oak Park Brewing takes home brew approach to crowdfunding - The brew-it-yourself folks behind Oak Park Brewing Co. moved in do-it-yourself fashion to create their own crowdfunding campaign to pay to furnish the beer garden of the Broadway brewery. While awaiting permits from the city of Sacramento, the company  attempted to raise $30,000 in a 30-day Kickstarter.com campaign earlier this year. The company got pledges for $14,412 by the end of the campaign, but the way Kickstarter works, only fully funded efforts get paid. So the company brewed up its own  crowdfunding campaign on its own website. Mark Anderson in Sac Biz Journal.