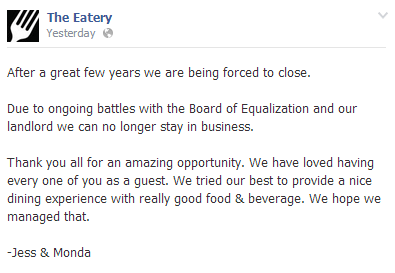 The Eatery, a West Sac mainstay for the last three years, closed for the last time on Sunday, it announced on its Facebook page on Wednesday.

I corresponded with Jess Milbourn, the chef and owner of The Eatery, over Twitter on Wednesday. Here's our conversation, slightly edited for clarity. (Please remember, since this was done over Twitter, all the individual lines are 140 characters or less.)

Q: What lessons you learned or what you might do differently next time?

A: Lesson learned: landlords and the Board of Equalization [who collect sales tax] have no legal obligation to help.

Research your management company & landlord before signing lease, ours were terrible. Look at the empty spaces in Southport Town Center

Over capitalization is the only way to be a successful restaurant. There will ALWAYS be a rainy day.

What I would do differently: pay government agencies at all costs. Once you enter into a pmt plan they have every right to swiftly levy every account.

Even if you call and beg for an adjustment and provide financials because you can't afford it.

The worst part about all of this is that it is our fault. We tried to make it right but got no cooperation from the BofE or our landlord. And again they had no obligation to but it makes no sense now that our landlord gets no money and the BofE will take longer. As for all of the food, service & restaurant issues we would have changed a ton. Always trying to improve.

Q: Did all your employees get paid? Or will they?

So in an answer, we don't know if they will be paid. I hope the BofE will release our employees payroll. We tried to be responsible but the taxman wanted theirs.

And please put that in anything you write. I screwed over a lot of vendors (and it makes me sick) by being forced to close, I made every effort to pay my employees and had their money taken from an acct that the collector knew was for payroll.

Several hours later, Milbourn gave an update on whether the Board of Equalization had released money so he could pay his employees:

A: Just wanted to provide you an update on our final payroll situation. We had set aside all of our final payroll in an account that the BofE knew was a payroll acct. Last week they levied it and returned it due to the fact it was payroll. On Tuesday they levied it again and we had been trying to get it back to pay the last checks. We submitted all of the checks that we had to give to our employees to the BofE and let them know it was exactly the same amt. We begged them to refund it so our employees wouldn't be screwed over.

I just found out that they will not be releasing any funds to cover the checks. So we are going to try to get some local government to help. Make phone calls, etc. If you'd like to speak to the collector his name is Zach [Last name and phone number redacted].

A: Board of Equalization. We were treated unfairly the entire collection process and now they are hitting our employees. It's funny you ask about FTB, we ran into trouble with them at the same time. They were cooperative and are now paid off, EDD as well.

Anytime a restaurant closes, it's sad, but I find the closing of The Eatery distressing. Certainly, the ownership group made mistakes and they own those. But I truly feel bad for the staff and the vendors who didn't get paid for goods and services rendered.

My West Sac friends have always loved the place, and I'm sad that they've lost their neighborhood spot. I hope the owners and staff land on their feet soon so we can again enjoy their food and hospitality.

Wrap N’ Roll blends sushi, burritos - Food trucks have brought us lots of fun and innovation. This is one of them. Whether you find it appealing or off-putting is anybody’s guess. This is fun food that’s fast and easy. Is it great sushi? No. It’s OK sushi done really big. That said, Wrap N’ Roll is not trying to compete with nearby Mikuni, Lou’s or Kru. These sushi burritos are meant to be wolfed down and to be done so for under $10. Some might find the nori wrap overwhelming on the palate. That’s a lot of salty seaweed for some. If that sounds like too much, ask for the soy wrap. Blair Anthony Robertson in the Sac Bee.

Looking for better deli ideas - A 44-year-old Roseville delicatessen whose sandwiches I grew up eating and later praised when I reviewed it in the early 1990s is among the finalists in this year’s  Calling All Dreamers, a contest sponsored by the Downtown Sacramento Foundation that bestows about $130,000 in business services to the winner, including a year’s free rent in a high-profile location. I visited  Better Foods Deli for lunch on Monday. It pains me to say this: Better Foods Deli is dreaming if it thinks it deserves to win an entrepreneurial giveaway. Ed Murrieta in Sac Biz Journal.

VIDEO: Stockton chefs create ‘aspara-burger’ - Keith Breedlove and Eric Thompson from Stockton restaurant French 25 show us their “Aspara-,burger” as well as a tasty dessert made with asparagus. Teo Torres on KCRA.