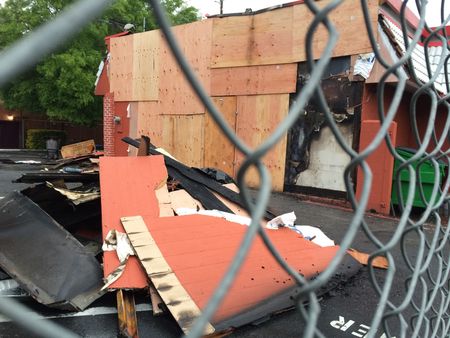 Picture of Cielieto Lindo's fire damage taken the day of the fire.

After the devistating fire that destroyed much of the newish East Sac Restaurant, Cielito Lindo owner Ramiro Alarcon vowed to reopen, with the location dependent on an insurance payout, reports the Sac Bee's Chris Macias.

Initial estimates from his insurance company pencil out damages of approximately $100,000. Alarcon said he expects Cielito Lindo to be closed for a maximum of six months for repairs, but hopes to open sooner. He frets about his employees dealing with lost wages.

“For many of the workers, this was the only job they had,” said Alarcon. “They’re having trouble.”

Depending on the final damage report, Alarcon said he may end up moving Cielito Lindo to another central city location. He prefers to keep serving food in east Sac, where the neighbors have shared plenty of encouragement during these uncertain times.

Read the entire story, which doubles as a really well-written profile of the chef and the challenges he's overcome, in the Sac Bee.

What will happen to Sammy Hagar space at Galleria? - A Sammy Hagar-themed restaurant once set to open last December in the Westfield Galleria at Roseville is in a position  similar to its downtown Roseville counterpart. Galleria representatives said they’re in talks with several groups interested in filling the 4,000-square-foot space. Potential plans include concepts involving the name and likeness of rocker Sammy Hagar. Sonya Sorich in Sac Biz Journal.

Check It Out: Taylor's Sweet Dessert Selection - But what’s unique about Taylor’s sweets is that most of them are available in individual packages, which means that you don’t have to buy a whole cake or pie if you’re only hankering for one slice. It also means that you can buy lots of different treats for the price of one big dessert, which is especially enticing when friends are coming over for dinner—what’s more fun than digging into a colorful, interesting dessert platter? Kira O'Donnell in Sac Mag.

Two Lively Local Brews - It’s been a while since I’ve tried any craft beers produced by Davis’ Sudwerk, so when I stumbled across two labels from the brewery I hadn’t seen before, I had to snatch them up. I was in for a surprise—both products were distinctive and interesting. Kira O'Donnell in Sac Mag.

The din of dining - That’s right, we go out to eat, spend a hundred bucks or more on a great meal with good wine, and all of us are pretty much reduced to some version of baby talk because so many restaurants are impossibly loud. “Restaurant owners as a group are guilty, with a few exceptions,” said Yates, whose company, Keith Yates Design Group, does acoustics work throughout the United States and overseas in high-end homes, restaurants and many other commercial buildings. “The fashion in the restaurant industry is to do nothing to address this unpleasantness because when new people come into the restaurant, they say, ‘Man, this is a happening place.’ There is a lot happening, but soon after they take their seat, they are yelling at each other.” Blair Anthony Robertson in the Sac Bee.

VIDEO: Megan's Bake Shop - A new bakery, Megan's Bake Shop, just opened it's doors and it's serving up delicious cupcakes and other sweet treats.  Tina Macuha is in West Sac doing a bit of taste testing this morning! On Good Day Sac.