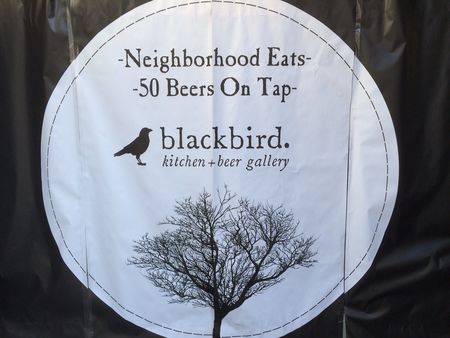 Blackbird reopened in late February. In the last several weeks, the region's two largest newspapers have printed reviews of the place, and their conclusions largely mirrored each other.

The new version’s food, at its best, shows admirable amounts of creativity and finesse. Even dishes that need more work, such as the steak dinner (on the tough side) or the pasta (a bit goopy), are relatively minor misses that could be resolved by taking a look at execution and consistency...

For a restaurant on the comeback trail, Blackbird is headed in the right direction. In the past, I have questioned whether Lampkin, ever the artist, can give the kitchen the kind of commitment and focus it needs in the months ahead.

For now, it’s a work in progress for Lampkin, who brings something different to the local restaurant scene. Her food has its own style. She has a passion to make Blackbird 2.0 flourish. Once this restaurant settles in, it could be poised to truly distinguish itself this time.

Chowder fries are nifty in theory—fries covered in bay shrimp, bacon and parsley, then doused with chowder—Blackbird’s play on poutine. A lack of acid and serious sogginess issues mar it from being a landmark dish, however. Steamboat oysters are served with caramelized leeks, Parmesan and plenty of bacon, and demand attention...

Wagyu beef tartare is a good measure of what’s going on in the kitchen, and Blackbird’s is certainly promising: Served with quail egg, paprika and artichoke confit, one cannot help but blush at the taste...

The drama surrounding Blackbird’s 2013 closure certainly left a bad taste in many mouths, yet like a phoenix, with as much radiance and fanfare, it’s now risen from the ashes and brought itself back to life. Some tinkering certainly needs to happen—a bit more thought and balance in the food, to be sure. However, the restaurant effuses a vibe that it’s striving to overcome obstacles, both past and present, which makes this eater excited to return again and again.

As for me, I've only been there once for happy hour, and found their fish taco extremely well done. That experience, along with these generally positive reviews, have convinced me to give them another shot. But I'll wait another month or two for them to fix their execution issues first.

Blackbird is located on 9th St. between J and K streets, and can be found online at http://blackbird-kitchen.com.

Slow, steady and distinctly, flavorfully Mexican: La Rosa tacos in West Sac - These tacos are very solid. While the chicken is good and the carnitas and asada are superb, my absolute favorite tacos here are made with lengua – the beef tongue, which combines wonderful flavor and tender, luxurious mouthfeel that elevates the eating experience. These are relatively lean tacos topped with salsa, slices of onion, and cilantro and garnished with sliced radish. The buche (pig stomach or esophagus) is also a standout. Granted, it’s not part of the everyday American diet to sink your teeth into cow tongue and pig innards, but if you’re looking for an authentic, blue-collar, no-nonsense meal that will make you think you’re eating street tacos in the heart of Mexico City, this is it. The meat, while seasoned and marinaded, maintains some of that earthy offal flavor, while the texture is smooth and slippery with a tender chew to it. Blair Anthony Robertson in the Sac Bee.

VIDEO: El Dorado Hills restaurateurs take on music giant, pay for principles - When Mark and Karoline Platt, owners of Sienna, an upscale restaurant in El Dorado Hills, decided to disagree with music licensing giant BMI, they had no idea how costly it would get. "We paid them for what we feel it's worth," Mark Platt said of their decision to send a check to BMI for $63.50 instead of the $2,100. BMI wanted. Dave Marquis on News 10.

The Mancakes at Four Sister’s Cafe in Roseville are Way Better Than Manwich for Breakfast - They have a dish there called “Mancakes”. No, this isn’t a soylent green infused breakfast stack. What we have here is a couple of buttermilk pancakes chock-full of juicy bits of sausage and sizable chunks of house cured bacon. The result is a salty, smoky, sweet breakfast worth a weekend drive. Rodney Blackwell in Sac Foodways.

VIDEO: Sacramento chef to compete in gelato world tour - Sixteen of the best gelato chefs from the United States, including one from Sac's own Devine Gelateria, will compete to create the world's best gelato flavor in Austin Texas on May 9-11th. On KCRA.