Dining News: Sac Brew Bike to Launch on May 16 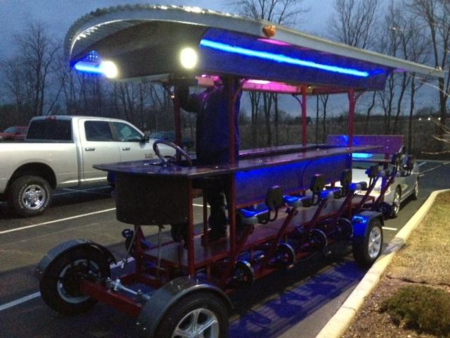 As I've visted other cities, I've run across a bike/bar hybrid, but I could never figure it out. Was it a real bar? Were people driking on it? Whatever it was, it seemed like they were having fun.

Now, Sac Brew Bike is bringing that contraption to our fine city and tells us what goes on and why people seem to be having such a good time.

I did an e-mail Q and A with the Chris Ferren-Cirino, who owns the vehicle with his wife Sarah, over the weekend. Here it is, slightly edited:

Q: What is the Sac Brew Bike?

A: Sac Brew Bike is a 15 passenger, 100% green, eco-friendly party bike or beerbike that cruises to some of the areas best brewpubs! Our mission is to create the ultimate brewpub experience by connecting people with some of Sacramento's best local and superb tasting establishments. The Sac Brew Bike is perfect for bachelor/ bachelorette parties, birthdays, team building/corporate events, meetup groups, and anyone looking to just have fun!

Q: What gave you the idea to do it?

A: Sarah and I had just moved from West Sacramento to Portland, OR in June of 2013 to relocate for the business I was working for to "climb the corporate ladder." Within the first few days, I heard music, laughter, and singing out our apartment window. When I looked down I saw this awesome, huge bike that was full of people rocking out and having fun. I knew at that very moment that this was something special and unique, and was definitely going to require some further investigation by the entrepreneur in me.

Q: How much is it? Either individual seat or a private trip?

A: We really wanted to make it affordable for everyone so the whole community can come out and enjoy the bike. The other thing that's unique about our bike is that you can buy individual seats if you had a very small group, or even just purchase one seat if you'd like to do a social mixer. That way it allows everyone to participate rather than force a few people to rent the entire bike. For a 2 hour tour that makes 3 brewpub stops, Individual seats are $20 (+tax) Sunday through Thursday and $25 (+tax) from Friday and Saturday- which we consider our 2 weekend days. If you have a private party and would like to book the bike, it is $280 Sunday-Thursday ($20 discount if you have 15 people) and $350 on Friday and Saturday ($25 discount with 15 people). Everyone can afford it, which makes it a great value.

Q: Can you tell me a little about the owners?

A: We are proudly owned and operated by a husband-wife team with local ties and support for the exploding craft beer scene in Sacramento. We are both UC Davis alumni, my wife Sarah a self proclaimed plant nerd and horticulture major, and myself an economics major. Together, we were/are both running dorks though, as we met on the UC Davis Track and Cross Country teams.  We continued our love for endurance sports by helping form a post collegiate triathlon team called Horsecow. It was through this team we developed our love of cycling. And like most runners and cyclists, we shared a love for delicious beer. From there it was really just a natural fit for us both since Sac Brew Bike combines two things we are both very passionate about- Beer and Bikes!

Q: Anything else interesting we should know?

A: Sac Brew Bike is really all about promoting local business and helping develop the Sacramento community. We wanted to start this business in the Sacramento area because we see how richly unique the area is, yet it still has so much room for growth. The craft beer scene is absolutely exploding right now in the Sacramento area, and we want to have a small roll in helping Sacramento create its own identity and beer culture. Sarah and I are REALLY excited to bring something completely new to Sacramento that's never been done, and we feel confident that this will be a blast for all those that come out with us. So please come support us as we fittingly open our bike for bookings starting now for Sacramento's Bike Month. If you hear a gentle roar that gets louder, it's likely Sac Brew Bike rolling through the streets of midtown. Thank you Sacramento, we look forward to serving you!

The bike is set to be delivered within the next week. As of now, they plan on stopping at some combination of Rubicon, New Helvetia, Der Biergarten and Tank House.

Rides start on Friday, May 16. To book your own seat, visit SacBrewBike.com.

VIDEO: Burglary of Sacramento Japanese Bakery Caught on Tape - For the first time in its 51-year history, Osaka Ya in downtown Sacramento was burglarized. Owner Linda Nakatani says thief used a rock to bust through the window and counter just before 4 a.m. Thursday. Erick Rucker on FOX 40.

Farrell’s offers free sundaes to military throughout month of May - The Farrell’s Ice Cream Parlour Restaurant at 1625 Watt Ave. in Sacramento is among a half-dozen California Farrell’s outlets offering a free ice cream sundae to military members and veterans throughout the month of May. Mark Glover in the Sac Bee.

Zpizza coming to the Pocket - Zpizza has announced its latest new venture: A sit-down pizza place in the Pocket, complete with five big television screens and 12 beers on tap. “This one will be bigger,” said Chris Bright, president of Zpizza International, as he contrasted it to the franchises in Folsom and in Roseville...Set to open this summer at 7601 Greenhaven Dr. near Caffe Latte, Bright said the developer and the shopping center owners are considering adding additional parking. Monica Stark in Valley Community News.

Insight coffee-house chain opens cafe at Pavilions - An Insight Coffee Roasters café opened Thursday at the Pavilions shopping center. The 1,400-square-foot café is the third location for the Sacramento-based company, which roasts all its coffee locally. Sonya Sorich in Sac Biz Journal.