Dining News: University of Beer Opening in Late May or Early June 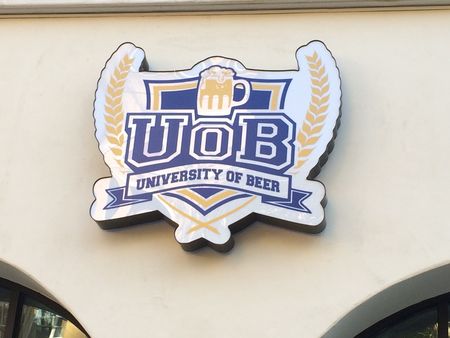 University of Beer, a tap house that will feature 100 beers on tap, will open in the next several weeks, reports Ben van der Meer in Sac Biz Journal.

“We should be having our grand opening later this month or in early June,” said Jennifer Meyer, who works with the tap house, in an email. “Currently, we are finishing up the construction and then we will just be adding in the rest of the details and getting the final touches perfected...”

“The new Sacramento location will be strong due to the midtown location, the bigger space, and the large fan base that has been already established at the Davis location,” she said.

Cowtown Eats first reported the arrival of the Davis-based restaurant in January.

The restaurant is owned by the same family that owns KetMoRee, a Thai restaurant in Davis, although different siblings run the different ventures.

Discussion: The Best Pizza in Sacramento - Furthermore, who says we don’t have amazing Pizza right here in Sac? Well actually, this guy does. Yes, the owner of a new Pizza place, “Trick Pony” – set to open this month in Midtown-hurt our hearts a bit when he said that our town is lacking when it comes to really good Pizza. Eek! We have to respectfully (but like, fully) disagree with that. While we are super excited for his new pizza spot-and will likely be first in line when they open- we can say with complete confidence that Sactown is hardly MIA when it comes to amazing Pizza. (But there is definitely room for more places and we welcome all of them! #NOM) If a restaurant in Melbourne, Australia can win the world’s top margherita pizza, (WTF?) then surely the notion that good pizza only comes from Chicago, Italy, San Francisco, et al. is complete bull. IMG_0414 Ok, enough of the italicized intro. Below, we present to you a list of our favorite existing Pizza joints that you can enjoy right here in Sactown. On Girls on the Grid.

Try It: LowBrau's Poolside - Feeling parched? Dive into LowBrau’s Poolside. This pinkly pleasing house cocktail is a boozy version of limeade, prepared with gin, Luxardo Maraschino (a sour cherry liqueur) and a dash of fresh citrus juice and bitters. The vivacious, brightly flavored tipple is garnished with a deftly swirled lemon peel and a tuft of mint (mix them into the Poolside for extra flavor). Kira O'Donnell in Sac Mag.

On Flavorful Food and Spicy Writing - Overall it was a phoenix-like second trip to Mother, almost every dish a beautiful presentation that held its own in the flavor department. The skill in presentation, preparation, and recipe manipulation showed through. It felt like the consistency from dish to dish was there, but one more return trip in the future might seal the deal on that one. Sac Eats on The Sac Rag.

1st Choice Pizza and Curry -  A friend and I trekked out to Elk Grove this week to 1st Choice Pizza and Curry to satiate our curiosity and our hunger. Italian and Indian?  Hmmm? That's a fusion that could work. I had heard about this place through friends and wanted to try the much talked about butter chicken pizza. Turns out the butter chicken pizza is pretty good and the mixture of flavors works well together. We got the mild and the flavors of cumin, coriander, garam masala, chili etc. were detectable but not overwhelming. They do have a spicier version as well for those of you who like a little extra kick. The medium pizza ($14.99) we got came with eight slices and the dough was a regular pizza crust. (I would have loved it if it had been a naan crust.)  Ally Gaffan on A Girl & Her Fork.

Instant-ramen revolution - But with Sun Noodle's new ramen kits, you can now make a bowl of restaurant-quality ramen at home. Plus, it's still relatively instant. Jonathan Mendick in Sac News & Review.