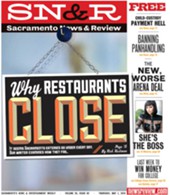 In the cover story in the Sac News & Review on the reasons restaurants close (I'll spoil it for you - mostly money reasons), Rick Kushman also gets restaurateurs to reveal what they think Sacramento diners want.

The next piece is comfort.

“I think feeling at home is the biggest thing in Sacramento,” said Michael Chandler [who just opened Strings Urban Eats], a veteran sommelier and restaurant manager. “Most people aren’t looking for an adventure, they want to feel like going out is easy...”

Sacramento has its own twist on comfort. Josh Nelson is a principal in the Selland Group, which includes Ella Dining Room & Bar, The Kitchen and the Selland’s Market-Cafes. He said despite their range of motifs, he sees the same general trait among Sacramento diners—they don’t want eating out to be a big commitment.

“I think people don’t want to have to put mental power into it,” Nelson said. “They want to go out, have a great meal, be interested in the food, but they don’t want it to be work. There are plenty of occasions in life when we have to make a level of commitment, but not when we eat out...”

Now we’re getting somewhere. This is Sacramento’s dining scene. Not every person, not every place. There are, of course, major exceptions to any generalization, but these qualities ring true intuitively: comfortable, so that we feel we belong. Casual, in the way of going to a party, not an event. We dress down as much as we can get away with, not up. Connected, so we feel a bit like regulars.

In this portion of the long article, it seems like all these restaurant owners say that what Sacramentans want is their own version of Cheers - where everybody knows your name.

But that doesn't ring true for me. I'm not a regular anywhere, despite how often I eat out. I enjoy trying new restaurants. Granted, by definition, I'm an outlier since I spend my free time on this site, so my preferences may not reflect the majority opinion. But my site traffic spikes every time I write about a restaurant closing or opening, which indicates to me that at least readers of this site aren't necessiarly looking for Cheers: Sacramento.

I'm not saying that Kushman is wrong based on the reporting he did. It could be that regulars are the backbone of a restaurant and are top of mind since they're who the owners see all the time, but I'm not ready to draw this conclusion based on anecdotal evidence. I'm not yet convinced.

Local dive bar perfect for that laid back atmosphere - Whether looking for a quick drink or a new hangout spot, local dive bar Hilltop Tavern, provides a selection of affordable drinks and a lively atmosphere just five minutes away from Sacramento State. Located at 4757 Folsom Boulevard in East Sacramento, Hilltop Tavern comes to life at night as many nearby residents walk to the bar without the stress of driving home. Kelly Tao in the Sac State Hornet.

What’s cookin’ in Bend - Chef John Gurnee, praised by Bee dining critic Blair Anthony Robertson for his cooking skills and edgy menus, relocated a month ago to Bend, Ore., where he took the reins at a restaurant called Drake. And, he’s lured his friend of 10 years, Bob Safford, the sous chef at Taylor’s Kitchen, to join him. Safford’s last day at Taylor’s Kitchen, at 2924 Freeport Blvd., will be May 10. He has worked with Gurnee before at Mason’s and Kupros in midtown Sacramento. Alas, Kupros didn’t work out for them. Cathie Anderson in the Sac Bee.

Fastest-Growing Alcoholic Beverage Category? It’s Not Craft Beer - Craft beer’s growth in the U.S. has been amazing, rising from 11.5 million barrels brewed in 2011 to over 15 million barrels in 2013. Over that same time span, however, production of another traditional American brew has tripled. We’re talking about the rise of hard cider. Brad Tuttle in Time Magazine.