Before Tuli Bistro closed, it was a personal favorite for many of my “restaurant situations.” Need a casual place to bring my parents when they visit from out of town? Tuli was the answer. Looking for a low key weekend dinner with the wife? Tuli was often our restaurant of choice.

It was never the best restaurant in Sacramento, but given where we work, where we live and what we’re able to afford to spend on a meal, Tuli, as a neighborhood restaurant, fit us perfectly.

But since it closed, I’ve been looking for a new comfortable neighborhood restaurant. I’m sure some would say that place should be Moxi at 21st & H, but after eating there twice, I still don’t understand what the fuss is about. I also wish they’d take the time to write the menu down so I can read it at my leisure – not have to keep up as the waiter recites the seemingly endless entrees they have available that night. I do have friends that vehemently disagree with me and can’t fathom why Moxi isn’t among my favorite restaurants.

But I think I have a new place to fill the void filled by the closing of Tuli: Bistro Michel. The restaurant, which is about to celebrate its fifth birthday, is located at 14th & O. Several weekends ago, I went to the restaurant after getting a great deal on gift certificates via Sac News & Review’s Sweet Deals site.

We were there on a Saturday night, and the restaurant had other diners, but the place wasn’t full. We were seated near a window and started ordering. 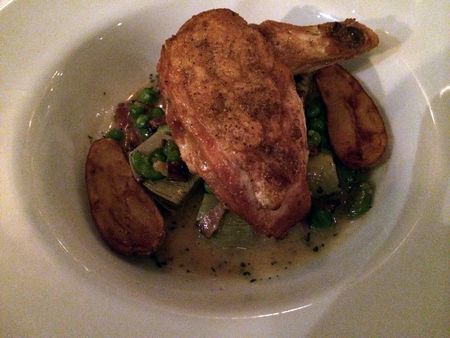 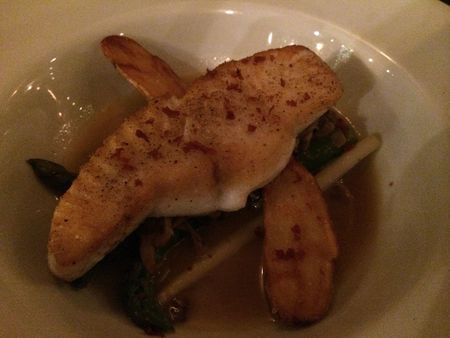 The fish of the day, which happened to be halibut. 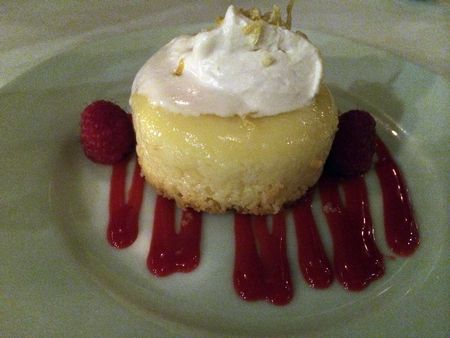 First of all, the food was fantastic. I’ve found that a good proxy for the skills of the chef is whether they can prepare chicken with a crispy skin and moist meat, and sear the fish well while maintaining a moist and flaky interior. The food produced by the kitchen was spot on.

While it’s trendy to be Farm to Fork, the owner/waiter told me that they’ve been changing their menus every couple weeks as different ingredients are available since they opened. Both dishes tasted fresh, highlighted the best of the season and had great contrasting flavors. I especially enjoyed the chicken dish with the interplay of the pea and lemon flavors. The dessert was also excellent, with the originator of the recipe being the owner’s mother.

Our meal for two, with a $40 bottle of wine, was about $120 including tax and tip. We had purchased $100 worth of gift certificates, so it actually cost us $70. They have a Groupon deal right now.

The food’s only half the charm of the place. It feels like a neighborhood restaurant. The service isn’t as polished as what you’d find at Ella, but that doesn’t mean it’s not just as friendly or competent. The décor isn’t trendy like you’ll find at Block Butcher Bar or LowBrau, but it doesn’t detract from your meal. The wine list isn’t as long as you’d find at The Firehouse, but there was enough variety to pair with any meal you’d have there. I don’t know if the owner is a sommelier, but he capably suggested a bottle of wine for us to share at dinner, and it was reasonably priced and a fine pairing.

I know this sounds like a back handed compliment. It isn’t intended to be. I don’t know why there’s not a line out the door for this restaurant. It’s not The Best at any of these categories, but the sum is much better than the individual parts. I loved the experience we had at the restaurant, so much so that I plan on going back for a special occasion meal later this month.

Bistro Michel is located at 1501 14th St. and can be found online at BistroMichel.com.