Dining News: Goodbye to The Farmhouse; Milbourn Heads to Broderick

All signs pointed to Jess Milbourn, former chef/owner at West Sac's The Eatery, opening a new restaurant at Vierra Farms named The Farmhouse. I speculated about it about a month ago.

Earlier this month, Rodney Blackwell at Sac Foodways seemingly confirmed the news , and Vierra Farms even said the restaurant would open on June 30. 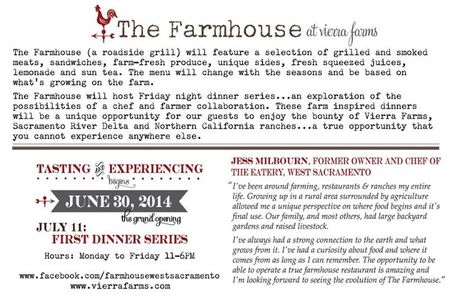 But it looks like things took a turn on June 10.

The news that Farmhouse would not be opening was confirmed by Vierra Farms.

Sorry to disappoint our friends however, we have just been informed that The Farmhouse will not be opening on the... http://t.co/2G5H7mIdQQ

Given the recent expansion of the Broderick empire, I checked in with Milbourn earlier this week. He told me that he'll mainly be working at Broderick and that he starts this week.

I wish him the best of luck. Given that the Broderick team will have their hands full with Trick Pony and Capitol Dime, I'm sure they're happy to have an experienced set of hands back at Broderick holding down the fort.

Broderick is located at 319 6th Street in West Sacramento, and can be found online at http://www.broderick1893.com/.

Gunther’s vs. Leatherby’s: Which ice cream is best? - The heat’s rising and we’re not just talking about the mercury on the thermometer. Now that summer’s officially arrived, it’s time for the second installment in a showdown of two classic Sacramento ice cream shops. Which ice cream tastes best in a blind tasting: Gunther’s or Leatherby’s? - Gunther’s of Curtis Park entered the ring as the defending champion, having bested Vic’s, the pride of Land Park, during a similar tasting held in June 2013 at The Bee. Gunther’s won in three out of four flavors that were tasted and evaluated by an esteemed judging panel. These much-beloved ice cream shops were judged on four classic flavors: vanilla, strawberry, chocolate and mint chip. Gunther’s won all but strawberry. Chris Macias in the Sac Bee.

Dawson's launches monthly beer dinners - Sacramento’s booming beer scene has another reason to rejoice this week as Dawson’s at the Hyatt Regency launches its monthly craft beer dinners. Every second Friday through the end of summer, chef de cuisine Michael Grande will create a four-course menu to pair with four selections from a local brewery. Jamie Slater in Sactown Mag.

Who Says Vegans Can’t Have Fun? -  I dropped in recently with my kids for a few slices of pepperoni, and spied perhaps the loveliest and most colorful pizza I have ever seen displayed on the counter. Turns out it was Pieces’ vegan pizza, topped with pretty much every vegetable in the place, plus warm chunks of pineapple and a scattering of something called “soyrizo”–the vegan alternative to chorizo. Kira O'Donnell in Sac Mag.