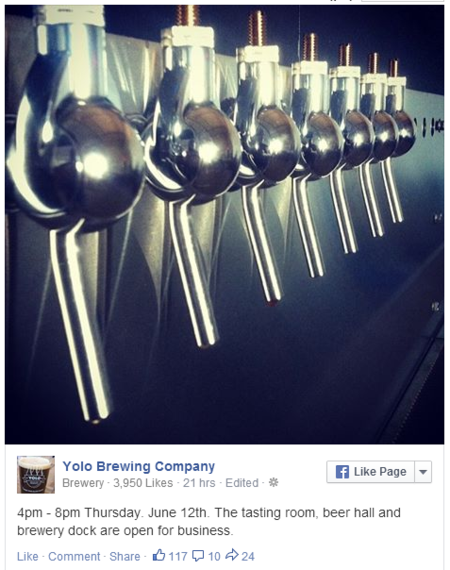 Yolo Brewing Company opened to the public for the first time on Thursday, they announced on Facebook.

The next project by Mike Costello of the now-defunct Brew It Up, the new West Sacramento-based brewery provides both "small batch craft beer" and personal brewing space.

With the opening of Yolo Brewing Company, there really is the start of a West Sac Brewing Trail, with Bike Dog Brewery and Jackrabbit Brewing Company within walking or biking distance.

Yolo Brewing Company is located at 1520 Terminal Street in West Sac, and can be found online at http://yolobrew.com/.

Enotria celebrates latest grand re-opening - But an e-mail came through last week touting a re-opening of Enotria, which was held Wednesday night with a “Carnivale Spectacular” theme. Gabriel Glasier, formerly of Maranello and Slocum House, oversees Enotria’s food program and created plates of prawn “corn dogs” at Wednesday’s soiree. He said Enotria’s basically been in a soft opening since March, and spent a lengthy spring vacation traveling to Southeast Asia and learning new recipes. Chris Macias in the Sac Bee.

Rise of the Sushirito - I can’t imagine throwing a Wrap N’ Roll Sushirrito into my regular dining routine like I would pizza or actual sushi, but I can see myself indulging maybe once every two months or so. If anything, I admire someone bringing a refreshing new concept to Midtown, and getting people so excited and curious about it. Alia Cruz in Submerge Mag.

Artisanal toast still does not exist - Cafe Bernardo introduced the concept in April, offering thick slices of Paragary Bakery bread with nutella and banana ($4), fromage blanc, banana, strawberry and honey ($5) and avocado, ham, fried egg and chili oil ($6). I ordered the fromage blanc—because I love fromage blanc—hoping against my better judgment that it wouldn’t be a heavy, sticky mess. The cheese brought a nice tang but there was too much honey, and really, too much stuff. It’s no longer toast if you can’t eat it easily with your hands. And the bread was lukewarm, still pale in color—an open-faced sandwich at best. Janelle Bitker in Sac News & Review.

Old Town Elk Grove sees resurgence as shoppers, diners, seek something different - The restaurant scene in Old Town Elk Grove has seen some recent additions. An entity called Lola’s Lounge Tapas & Latin Cuisine recently applied for a license to serve alcohol in the historic general store building on Elk Grove Boulevard, which once housed the Elk Grove Brewery & Restaurant. A new addition to the local La Favorita Taqueria family of restaurants is close to opening on the boulevard, while The Italian Delicatessen & Fine Foods, a spinoff of Old Town’s popular Brickhouse restaurant that opened last fall, has quickly developed a following. A short walk away is another mainstay, the highly regarded Boulevard Bistro. Darrell Smith in the Sac Bee.