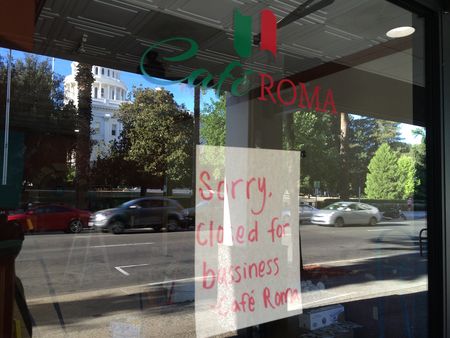 Cafe Roma, the lunch spot across the street from the Capitol on L Street, has closed, reports the Capitol Morning Report.

I stopped by on Tuesday evening and saw that all the tables and most of the equipment for the restaurant had been removed. A quick check on its very active twitter account shows that the last post was on June 11. 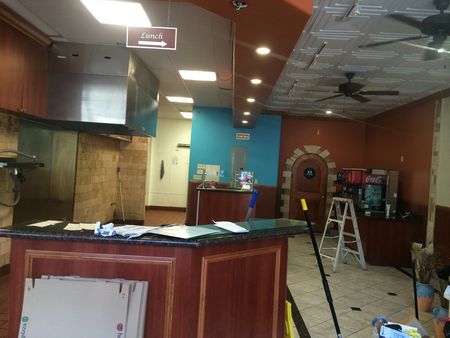 A restaurant matching its description was, at least at one point, on sale on RestX.com.

Having worked in and around the State Capitol for more than a decade, I've eaten at Cafe Roma more than a dozen times, but I haven't been there in several years. While the food was often good, I never felt full or satisfied after eating one of their salads. I don't have that same issue eating salads at other local restaurants like La Bou or Chicory.

While I feel for the owners and workers at the restaurant, I'm also excited for what comes next. Downtown needs a Pluto's or Jack's Urban Eats. Maybe this makes the perfect location for a takeout only store? One can only hope.

BLT Week, general bacon mania return July 7 - Bacon is almost back. Not that it ever really went anywhere. But the dudes behind Sacramento Bacon Fest (full disclosure: one of those dudes is SN&R’s Nick Miller) will pork up the town for the third annual BLT Week, July 7 through 13. Janelle Bitker in Sac News & Review.

Winning isn’t everything - You won’t find Elizabeth McCleary crying in her gelato, though she didn’t finish among the top three contestants in the North American leg of the Gelato World Tour...Although McCleary’s recipe didn’t win the crowd vote in the Austin leg of the tour, it did rank as the No. 2 gelato in a vote by the 16 gelato chefs. After Bertolazzi gave McCleary a Facebook shout-out, several of Bertolazzi’s old pals in Italy asked if they could get the recipe to make in their gelato shops. Cathie Anderson in the Sac Bee. (Third item.)

I’m just tired of driving all the way to Rocklin to get a good slice of pizza… - Grayson and Sonia Lee are craftsmen. The Lee’s are the co-owners of Il Pizzaiolo in Rocklin and another location about to open in Loomis. These stores are the 2nd and 3rd of the Pizzaiolo family with the first being the brainchild of Lee’s partners, Pete and Jacqueline Lostritto. The Lostritto’s own the original location in Colfax (opened in 2012)  and co-own the new locations with the Lee’s. The Colfax restaurant has garnished much praise including a rare perfect 5 star yelp rating (after 60 reviews) and kind words from the dough-obsessed Bee food critic Blair Anthony Robertson. Their approach is simple. The dough, sauces, dressings, gelato, tiramisu, and croutons are all made in house. The prices are low, with a 12″ priced at $8. The pizza is Neapolitan style cooked in under 2 minutes at 800+ degrees. The ovens are built by Forno Bravo and named after Volcano’s, Rocklin’s oven is dubbed “Etna” and Loomis’ “Vesuvius”. Ryan Donahue in Sac Foodways.

Try It: The Full English - Fox and Goose has a new menu item Anglophiles are sure to love. The downtown dining institution–popular for years for its robust and flavorful breakfast items and pubbish conviviality–has added a staunchly British dish called The Full English. Kira O'Donnell in Sac Mag.

The Cellar in Historic Folsom - There are some restaurants that are just a pleasure, and The Cellar on Sutter Street in Historic Folsom is one such place. I’ve been to The Cellar a number of times, but when I learned of their expanded menu, I couldn’t wait to try it. Executive Chef Joe Cuka has created a little something for everyone with a whole lot of deliciousness going on. Maria Kniestedt on Sac Foodies.

VIDEO: MoMo Meat Market - Cambi Brown is checking out MoMo's Meat Market and finding out their offerings on this day for dad. On Good Day Sac.