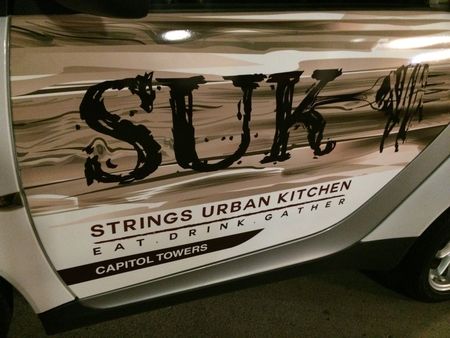 At dinner, Strings offers table service. We shared the Bruschetta Rustico, with chunky toasts layered with seasoned cheese, grape tomatoes, basil and balsamic vinegar. With less garlic than many versions, it’s a delicious and date-friendly choice...

It’s an old tradition that deserves renewed attention. The food at Strings is similar: traditional dishes with new attention to detail and flavor. It’s a nice addition to the downtown grid.

I've eaten there several times, including during their media preview and later for happy hour on my own dime. I've enjoyed it both times, due to its relaxed atmosphere, friendly service and solid food. On my next visit, I'll be checking out their retail wine store too.

Strings Urban Kitchen is located at 1500 7th Street, can be found online at StringsUrbanKitchen.com.

LowBrau brunch features signature sausage, drinks - What is less known about them is that they also serve brunch. On Saturdays and Sundays, their deck, shaded by a large tree canopy, is an excellent spot to people watch, sip a shandy, and nosh on sausage-centric brunch food. Andrea Thompson in Sac Biz Journal.

VIDEO: Ice Cream Shops Thrive in Record Heat - It should be no surprise that ice cream shops around the valley are very busy during this spell of triple-digit heat. Staff at Leatherby’s in Elk Grove say they go through 500 to 600 gallons of ice cream on a hot day. Multiply that by three locations, and that number ends up being around 1,500 gallons. Alisa Becerra on FOX 40.

VIDEO: World Cup Recipes - Spain - The World Cup is an international sporting event that allows fans to root for their home country no matter where they live. The World Cup is also a great time to learn and celebrate the diversity of the games. Sac&Co is getting into the World Cup spirit with our week long series, "World Cup  Recipes" Today we visit Spain and learn about tapas courtesy of Chef Marcos from the restaurant Tapa the World located at 2115 J Street in Sacramento. On News 10.

VIDEO: Icing on the Cupcake is Back! - Bethany Crouch lets us know about the cupcake shop’s grand re-opening and new products. Bethany Crouch on FOX 40.

AUDIO: From Food Truck to Franchise in 3 Years with Krush Burger's Davin Vculek - In today’s episode, I sit down with co-founder of Krush Burger, Davin Vculek. In this interview Vculek shares the brand concept was developed back in culinary school, how massive expansion into other areas beyond a food truck was always part of the plan, and what he envisions is coming next for the business. Vculek also shares hard-won advice about name selection for your business to ensure it doesn’t need to be changed after you’ve built a name locally. On Food Truck Empire.