Dining News: Why Doughbot Is Closing For Good in August 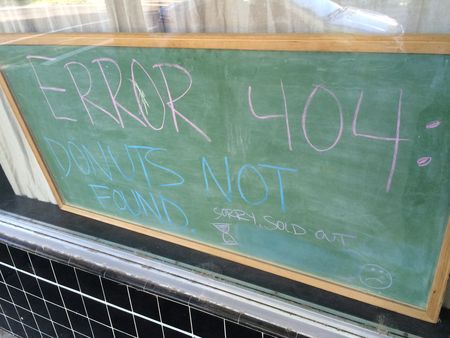 Hey, you lovely doughnauts, staunch and fervent supporters of from-scratch, hand rolled, hand cut, deep fried goodness- whatever rumors you may have heard about Doughbot closing are true.

Bryan and I have hustled our asses off for the past 3 years, from gutting the remains of Ricksha, to having a record sell-out National Donut Day. We’ve been given incredible opportunities like competing (and kicking ass, if I do say so myself) on Donut Showdown, and giving a voice to small business in DC in regards to closing tax loopholes exploited by multinational corporations. We’ve worked with amazing local folks- big ups to Insight Coffee and Edible Pedal! It’s impossible to put in to words the gratitude we feel for this community. We really have the best customers, the best FAMILY, honestly.

We’ve hesitated in announcing our closure. It’s difficult to inform the same people who tell you, “We’re so glad you guys are here, doing what you’re doing,” that you just can’t do it anymore. As rewarding as these last few years have been, they’ve also been incredibly difficult. We’re simply burned out.

We’ll remain open through the first weekend of August, and try to cycle as many of your favorites through the menu as possible until then. We sincerely appreciate your continued support over the years, and we hope we’ll see you soon.

I met Bryan, one half of the team that makes up Doughbot at the Have An Offal Day event last year, and I asked him about his schedule. It sounded brutal. Essentially, when you go to sleep, he's up and headed to the store to make the next day's donuts. After hearing it described to me, I'm impressed they lasted this long.

With that said, they were very thoughtful in announcing their impending closure seven weeks in advance, giving loyal fans many opportunities to give them a final visit or two before they start their next adventure in life.

I hope they don't give up their recipes for good, though and continue to give us occasional opportunities to keep getting our Dougbot fix at pop up stores, in partnerships with existing restaurants or at Farmers markets.

Doughbot is located at 2226 10th St., and can be found online at Doughbotdonuts.com.

The Death of Craft: Hard Work Sucks - Do we put too low a price on the “authentic”? Should a thoughtfully made doughnut with organic ingredients, precisely sourced toppings, and hand crafted fillings cost more than a Twinkie? How much more? How much will you pay for a hand-formed burger patty? Does it cover the cost of rent, licenses, health insurance, business insurance, ingredients, fixtures, electricity, gas, certifications, college loan debt, and still leave enough for a decent wage? On The Sac Rag.

BevMo opened Friday in midtown - In addition to a large selection of beer, wine and liquor, the store features many special touches specific to the Sacramento region. Those elements range from local beers to wine-themed bike racks designed by local artist Gina Rossi. Guests also can expect a tasting room. Sonya Sorich in Sac Biz Journal.

Yui Marlu: Another sushi dimension - Yes, Yui Marlu serves up California rolls, plus a menu full of American-style makizushi. But its mastery lies in Japanese-style sushi and an assortment other traditional Japanese fare. Jonathan Mendick in Sac News & Review.

Block Butcher Bar - If you’re looking to beat Sacramento’s heat in the company of a cool drink and some of the choicest house-made charcuterie around, head to Block Butcher Bar in Midtown. Snuggled next to LowBrau on 20th and K streets and under the same ownership, Block Butcher Bar offers up a range of cool cured meats, pickled goodies and fresh local cheeses to complement whatever brew you’re drinking (or holding to your forehead), whether it’s one of the dozens of bourbons, scotches or whiskeys showcased on the wall, a microbrew or a summer-appropriate cocktail. Megan Foster on Sac Foodies.