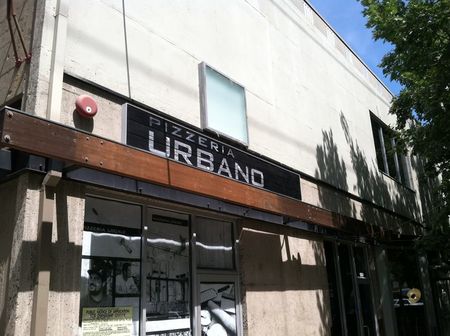 Sac Biz Journal's Mark Anderson has more on the business from an April story:

After a quick three-week remodel, the restaurant space will re-open as a new pizza-by-the-slice restaurant, with a new name and new owners. It will also have a larger menu of salads and paninis.

The name is still being worked on, said Carlos Ulloa, who, with his brother Jose Ulloa, also own Azul Mexican Food and Tequila Bar.

The new pizza place will take up the main room that is now Luigi’s as well as the side room that is a concert venue. Carlos Ulloa said he doesn’t know yet whether the new venue will include shows.

From the looks of the Pizzeria Urbano Facebook Page and the pictures of the staff training they're doing, they'll be open soon. Stay tuned for more details.

Pizzeria Urbano is located at 1050 20th St. and can be found online at https://www.facebook.com/PizzeriaUrbano.

Roxie Deli plans new location on R Street - The owners of Roxie Deli in East Sacramento are seeking a beer-and-wine license for a new location in the renovated building at 15th and R streets. The new restaurant, called Roxie Deli and Barbecue, will open later this year, though the owners have yet to set a date. They haven’t yet gotten access to the space to begin tenant improvements, said co-owner Chris Tannous. Mark Anderson in Sac Biz Journal.

Launching Preservation takes perseverance - Poole imagined that his Preservation & Co. near the corner of 19th and Q streets would open in the summer of 2013. The business is fashioned as a production center for his award-winning Bloody Mary mix, along with a line of pickled vegetables and other preserved goods using Sacramento-grown ingredients. It’s a retail storefront and commercial kitchen that he foresees as a production hub for Sacramento’s culinary scene. But now, this: Poole’s just learned the walk-in cooler that cost him $13,000 might not be compliant with city code. Though he held a grand opening party on June 22 to show off the 3,000-square-foot space, it’s not officially open until the city Powers That Be issue all the proper permits. And with the walk-in issues, Poole’s not exactly sure when Preservation & Co. can open to the public – maybe by the end of July. Chris Macias in the Sac Bee.

Troy Paski on his Hoppy Brewing Co. turning 20 - In a town full of burgeoning breweries, Sacramento’s Hoppy Brewing Co. is celebrating its 20-year anniversary. Hoppy’s owner, Troy Paski, has had a front-row seat to the Capital City’s evolving (and now exploding) beer scene, and while the competition has increased, Paski sees the rising tide of craft beer as lifting all breweries. It also helps that Hoppy – as its name indicates – was ahead of the curve when it came to celebrating the ingredient that’s become inseparable from the now-famous “West Coast IPA” style. Will Wright in the Sac Bee.

Supreme Court is asked to review Calif. ban on force-feeding birds - California’s ban on force-feeding ducks and geese to produce foie gras is on the Supreme Court’s summer menu. It might be more than a mere delicacy. Thirteen states _ including South Carolina, Missouri, Kansas and Georgia _ are urging the court to review California’s prohibition. Serious constitutional principles are on the line, they and other critics of the law say. Michael Doyle in the Sac Bee.

A lot to digest - Sushi chef Lou Valente has the chops to please discerning diners, as Bee dining critic Blair Robertson noted in his March review. Even so, Valente told me that he’s had a bit of a learning curve since opening Lou’s Sushi in midtown Sacramento on Oct. 1. “The biggest challenge has been just payroll, managing people’s hours, making sure everybody takes their breaks, the kind of stuff that can get you in trouble,” Valente said...On the busiest days, Valente serves up about 180 meals, though his restaurant seats only 30. After Robertson’s review, Lou’s business surged by 30 percent at 2801 P St., and Valente shifted into restaurant manager mode. Cathie Anderson in the Sac Bee.