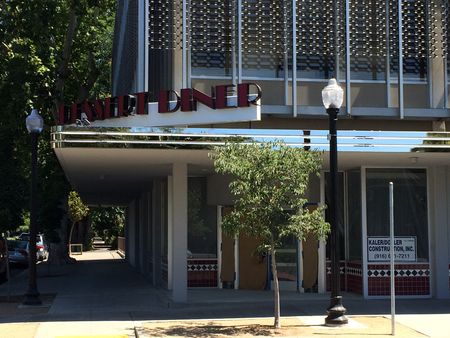 Rick's Dessert Diner will say farewell to its K street location and move to a larger spot a block away on J street next week, reports Jamie Slater in Sactown Mag.

The new location at 2401 J St. will nearly double the diner’s size to 3,600 square feet, accommodating 100 customers indoors and up to 40 on the patio (currently, only 40 people can fit inside the space) while allowing for a wider range of the delectable desserts for which Rick’s is famous...

Eita says that in addition to continuing to offer Rick’s favorites like Coconut Pineapple and Death by Chocolate cakes, he intends to reintroduce macaroons, homemade biscotti, Rick’s classic peach cobbler and a Coca Cola Cake (which Eita made on Good Day Sacramento last May) on a more regular basis.

In addition to the expanded space, Rick's dessert diner also has plans to offer beer and wine.

Rick's Dessert Diner is currently located at 2322 K St, and can be found online at http://ricksdessertdiner.com/.

33rd Street Bistro remains solid but staid - In 1996, my predecessor, Mike Dunne, gave the food three out of four stars, emphasizing the quality and value and noting that a couple could enjoy dinner for about $30. In 1998, the rating had climbed to three-and-a-half stars, identifying 33rd Street Bistro as one of the best restaurants in its category. And then something happened. No, 33rd Street Bistro didn’t change much. But Sacramento sure did. What once seemed new and enterprising now feels safe and sometimes dated. Blair Anthony Robertson in the Sac Bee.

Krush Burger always on the move with new locations - Thankfully, business is steady despite the out-of-the-way location. Lunch is the biggest business, and Saturdays are the busiest. “That turned out to be a shocker,” says Davin Vculek, who co-owns the company with Joseph Blanton. Since customers came mostly at lunch, he explains, “We had to trim back some of the evening hours, but that may change since there’s a lot of development going on in the river district and Township Nine.” Andrea Thompson in Sac Biz Journal.

San Diego Favorite, Sammy's, Arrives Locally - Overall the food we had was excellent and I was very impressed.  I'm a bit dismayed at the location, but hope that it does well there. Catherine Enfield on Munchie Musings.

Sactown Wings festival to debut Aug. 23 at Fremont Park - As the saying goes, the latest food festival to debut in Sacramento ain’t no thing but a chicken wing. Sactown Wings will take place on Aug. 23 at Fremont Park (16th and P streets) from 2 p.m. to 7 p.m., featuring a variety of chicken wings that can be washed down with local beers. Among those restaurants which will be vending their best wings: Chicago Fire, Barwest, Fieldhouse American Sports Pub, Blue Cue and Water’z Wingz. Chris Macias in the Sac Bee.

Beat the Heat by Stopping Into Vic's Café - If you're looking for some nibbles, this community coffee shop also offers a limited menu of breakfast burritos, salads, sandwiches and Old Soul Co. pastries. And of course- you can always pop into their wonderful, old-fashioned ice cream parlor next door afterwards to satiate your sweet tooth. Vic's is a terrific addition to the neighborhood. There's something for everyone. Ally Gaffan on A Girl & Her Fork.