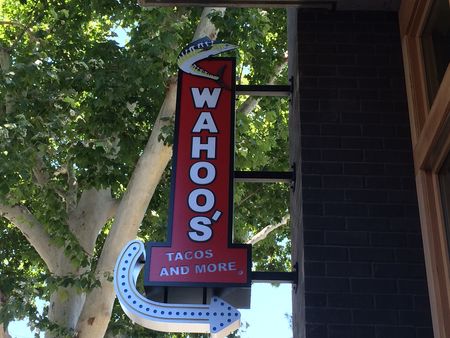 During the Handle District's annual Bastille Day Waiter Race on Sunday, they had employees handing out coupons for free entrees. One of their employees freely shared the info.

They also invited me inside to take a look. The space is still unfinished, with at least several days worth of work left on the interior. If I had to guess, even if they open on the 21st, it'll be several weeks before they get all they move from the "soft launch" phase to the "well-oiled machine" phase. For those who aren't familiar with Wahoo's, it's an Orange County chain that, per its Web site, focuses "on providing delicious food of the highest quality. Every aspect of our signature charbroiled fish, steak, chicken, and new tofu selections is paired with our fresh salsa and tortillas for an unforgettable experience that not only satisfies your hunger, but is healthy too."

I've had it in my travels to SoCal and enjoyed their cuisine. It's probably in the same class as Chipotle, with more emphasis on fish as the protein and a more varied menu.

Wahoos will be located at 1820 L Street, and can be found online at Wahoos.com.

* Address corrected, per The Sac Rag.

Five things to know about the California State Fair - 1. Is the bacon-wrapped churro worth trying? I devoured my first bacon-wrapped churro during a media preview event on Thursday. The experience was nothing short of life-changing. The item, which is infused with Jack Daniel’s Tennessee Whiskey, comes courtesy of food vendor The Bacon Habit. It’s one of the better sweet-savory combinations. Since the churro isn’t incredibly gigantic, it’s a manageable culinary challenge. Prepare your dipping strategy in advance (the item comes with whipped cream and syrup), and avoid extreme carnival rides immediately after the experience. Sonya Sorich in Sac Biz Journal.

Consumer Reports’ surprise winner for best burger can be found locally - A burger chain with outposts in Sacramento, Davis, Elk Grove and Granite Bay was just named best in America by Consumer Reports, beating out better-known burger vendors In-N-Out and Five Guys...Back in Sacramento, Habit Burger will reportedly become one of the few chains to open a spot in midtown, taking on 2,500 square feet in a building on 16th and O streets. Isabelle Taft in the Sac Bee.

TGI Fridays takes a chance on 'endless' appetizers - TGI Fridays, whose signature item is arguably its appetizer line, today launches a high-profile but risky "Endless Appetizers" summer promotion that offers all-you-can-eat appetizers for $10 per person. Guests can choose one appetizer from a list of the the chain's most poplar starters — including loaded potato skins, boneless buffalo wings and mozzarella sticks — and receive unlimited refills. And while sharing is discouraged, that rule will not be enforced by servers, says Brian Gies, chief marketing officer at Fridays. "At the end of the day, our servers aren't policemen," says Gies of the promo, which runs through Aug. 24. "We're not going to slap someone's hand if they reach over and share someone else's mozzarella sticks." Bruce Horowitz on USA Today.

VIDEO: Diverse food options at the California State Fair - From farm to fork and bacon wrapped churro's everything is an epicurean delight at this year's State Fair. Mae Fesai on KCRA.

VIDEO: What To See At The 2014 California State Fair - It's state fair time again! The fair runs from July 11-27 and boasts some of the best food and fun to be had in the Sacramento region. On CBS 13.