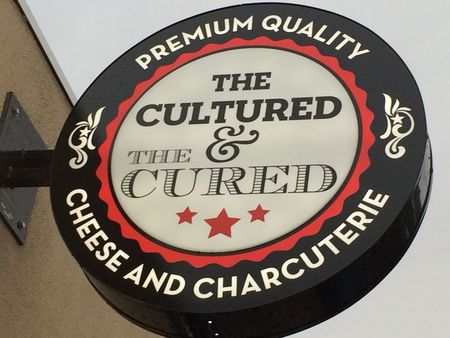 The Cultured & The Cured, a the cute cheese and cured meats shop in East Sac, got its liquor late last week, it announced on Twitter.

I stopped by on Sunday to see what they were doing with their new license.

Initially, the plan is to serve California wines and beer. The emphasis will be selling alcohol to be consumed on the premises, although they may have a small selection of wine for sale if you're looking to buy some vino to go with the bread and cheese you got to go.

While thier tap wasn't installed yet on Sunday, it should be installed mid-week. They plan to start by serving beer from North Coast Brewery.

Unfortunatly, you'll only be able to partake in alcohol inside the limited seating their store offers and not yet on the patio. One of the reasons is that the government requires that outdoor drinking be done in an enclosed space, and there's no fence surrouding their modest patio yet.

But even without outdoor drinking, it's a good addition to an already awesome little neighborhood store. I only wish they'd open one closer to where I live.

The Cultured & The Cured is located at 3644 J Street and can be found online at http://culturedandcured.com/.

LowBrau founders bringing new restaurant to West Sacramento riverfront - Michael Hargis, Clay Nutting and chef Michael Tuohy will bring their midtown magic to the riverfront, introducing what Nutting describes as an “urban farm kitchen and beer garden” concept to The Barn. The yet-to-be-named eatery is slated to open with The Barn, itself tentatively scheduled to make its debut as the centerpiece of The Bridge District development along the Sacramento River in spring 2015. S.T. Vanairsdale in Sactown Mag.

LowBrau owners plan West Sacramento eatery, beer garden - The owners of midtown’s LowBrau are eyeing a project that will bring a new set of food and drink options to West Sacramento’s riverfront. Restaurateurs Clay Nutting and Michael Hargis are overseeing an eatery and beer garden that will be embedded in The Barn, a $5.6 million outdoor venue developed by Fulcrum Property of Sacramento. The two are joined in the venture by Michael Tuohy, the executive chef of LowBrau and its sister restaurant, Block Butcher Bar. Chris Macias in the Sac Bee.

Cool off with some of Ginger Elizabeth's intense ice cream offerings - You have three more chances to try a sundae at Ginger Elizabeth Chocolates in midtown before ice cream season ends. On the second Saturday of each month from May through October, visitors can order her unique sundaes, and tomorrow is this month’s special day. Saturday’s sundae has raw milk ice cream, salty Marcona almond sherbert, whipped Saint-André cheese, local plum compote, caramelized pie crust, and Chantilly cream. Need I say more? Andrea Thompson in Sac Biz Journal.

Zazon Guadalajara Grill: Jalisco dreamin’ - Zazon Guadalajara Grill offers a fun experience for learning more about foods native to the state of Jalisco, where the city of Guadalajara resides. The menu is extensive, though, and there are plenty of familiar dishes, too...In fact, the tacos are outstanding. The cabeza (beef cheeks) and barbacoa are the best fillings—both so tender they practically melted. The chicken tasted rich with dark meat and a subtle spice, while the carnitas are flavorful but tend toward dryness. Typical of Jalisco, there are also fried fish tacos on the menu. Ann Martin Rolke in Sac News & Review.

Celebrating 20 years of authentic food at Centro Cocina Mexicana - Guests loved the tortillas and tamales made in-house with ground corn, as well as the salsas, molés and other sauces made from scratch. “In the kitchen, there are three women who have been with us for 15 years or more. They made these recipes with their mothers in Mexico. There’s a combined 47 years of experience from the cooks preparing the toritillas, salsa, and molé.” With those experts and chef de cuisine Fidel Lopez in the kitchen, patrons can expect an authentic experience. Andrea Thompson in Sac Biz Journal.

VIDEO: Family of chefs cooks up healthy meals with new food truck - 's a true culinary family affair for the two chefs behind the new healthy Fork Lifter Food Truck. "We were tired of making money for other people," Richard Joseph said. "We wanted to have something for our families, to take care of our families." Chefs Richard and Adam Sakakihara are entrepreneurial brothers-in-law. They also like to workout. So, when they decided to start their own food truck, cooking up healthy food was a no brainer. Siemny Chuuon on News 10.

VIDEO: Pizza Restaurant Owner Falls Victim To Ransomware Attack, Forced To Rebuild From Scratch -  It all started with Pete Lostritto of  Il Pizzaiolo opened an email he thought was an job application, but instead froze 90 percent of the shop's files. On CBS 13.

VIDEO: Car Crashes Into Sacramento Pizza Parlor - Firefighters say the car plowed through the front windows and ended up all the way inside the Mountain Mike's on La Riveria Drive, causing major structural damage. On KOVR.