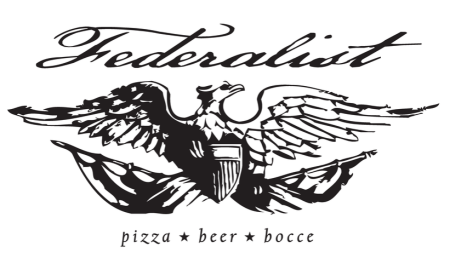 In mid-September, Sactown Magazine's Stephanie Towne reported that it would attempt to open by Oct. 11 -- Second Saturday. It appears that the opening has slipped a little longer.

The containers will house a kitchen area with a wood-fired oven, which will churn out everything from Neapolitan-style pizzas to roasted lamb and chicken for wrap sandwiches (other menu items include charcuterie, seasonal salads and other small plates).

I hope Sactown Mag is right and that my source is wrong. Either way, I'm excited to give the place a try.

When it opens, Federalist Public House will be located at 2009 N St., or online at FederalistPublicHouse.com.

Tower Bridge dinner wraps up a bigger Farm-to-Fork celebration - Sacramento’s second Farm-to-Fork celebration, capped by a gala dinner Sunday night on the Tower Bridge, outdid last year’s installment in nearly every way. Even rain – agriculture’s best friend and a welcome visitor to the region over the weekend – seemed to know it should make way for Farm-to-Fork 2.0. Midday sprinkles became brilliant late-afternoon sunshine that bounced off the yellow-gold bridge holding a well-dressed crowd who nibbled on sturgeon-poke appetizers and drank local wine. Carla Meyer in the Sac Bee.

VIDEO: Farm-to-Fork Festivities Conclude with Dinner on Tower Bridge - The two-week Farm-to-Fork festivities wrapped up with a Gala Dinner on the iconic Tower Bridge. More than 30 area chefs, led by Jason Poole of Hyatt Regency Sacramento and Brian Mizner of Hook & Ladder, served a 7-course-meal to more than 700 guests. Rina Nakano on FOX 40.

Capital Dime: The do-over - Brunch is a fantastic event best armed with bottomless mimosas. The biscuits and gravy are a savory start to the morning. Best to avoid the baked French toast; it’s a sugar bomb that could kill a diabetic through skin contact alone. For the most part, the avid bruncher will be quite happy with the menu...Overall, Capital Dime meets the expectations it set for itself: affordable, approachable, farm-to-fork food for the masses. So, you masses, go get a table and enjoy. Garrett McCord in Sac News & Review.

Blast 825 pizza restaurant opens in Roseville - Blast 825, which specializes in quick-fired pizzas, has opened a new location at 1132 Galleria Blvd. in Roseville. Grand-opening festivities are on Oct. 2, with half-price pizzas and salads from 5 to 9 p.m. A portion of some purchases made between Wednesday and Oct. 2 will go to regional charities, the company said. Mark Glover in the Sac Bee.

Sac Brew Bike takes riders on a beer field trip - But taking a pub crawl downtown on a trolley-esque bicycle that rides in the middle of traffic, decked out with disco lights and club music alongside 14 of your closest friends? It's a total go—one made possible thanks to Sac Brew Bike...The last thing I remember was being dragged back from Tank House BBQ & Bar by a Justin Bieber look-alike, because I kept begging the cook for barbecue ribs. So, yeah, a good night and a great ride. Alex Hernandez in Sac News & Review.

Yakitori Yuchan - It’s finally open! Six months ago, my friend Kerry gave me the heads up that the design company she works for, Benning Design, had been hired to work on a soon-to-be-opened yakitori place in Davis. The owners, a Japanese couple, anticipated opening Yakitori Yuchan by fall. Since then I’ve been eagerly (and patiently) waiting to eat some yakitori without having to drive to the Bay Area. Last night, I finally got my wish. My friend and I popped in during their soft opening and had a very pleasant dinner. The interior is quite pretty- a beautiful artsy bamboo lighting fixture takes center stage, there’s lots of color splashed throughout the restaurant. Ally Gaffan on A Girl & Her Fork.

VIDEO: Sactoberfest - It's a chance to celebrate Octoberfest just like they do in Germany. Lori is at the cookset for a delicious preview of Sactoberfest featuring Chris Jarosz of Team Broderick. On Good Day Sac Part 1 | Part 2.

AUDIO: Lucky Dog Ranch And What It Means To Be Farm-To-Fork - The Sacramento region is notorious for its farm-to-fork restaurants as well as a thriving agricultural landscape. Lucky Dog Ranch Owner Terri Gilliland speaks with Insight on how their organic, grass-fed beef makes it to the table of their restaurants including Roxy and Lucca in Sacramento. Rick Kushman on Capitol Public Radio.