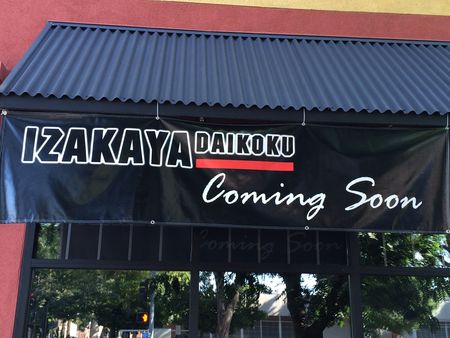 Izakaya Daikoku, located at 19th & S, will open on Wednesday, Oct. 1, a waiter at sister restaurant RyuJim Ramen House told diners (and a trusted Cowtown Eats source) over this weekend.

Izakaya Daikoku has said it will serve dishes in the traditional izakaya style, which is a sort of Japanese tapas.

The restaurant shares owners with RyuJin Ramen House in the Safeway parking lot at 19th & S, and Akebono in Land Park.

Per Sac Biz Journal, they will also serve sushi, sashimi and other dishes available at Akebono.

According the waiter, Izakaya Diakoku was scheduled to open this past week but was delayed due to a last minute hiccup.

I'm very excited for the new restaurant. I'm a big fan of the owner's other restaurants and look forward to trying a traditional izakaya in Sacramento.

Dining News: Everything You Need to Know About Izakaya Daikoku

Izakaya Daikoku will be located at 1831 S Street, and can be found online at http://www.izakayadaikoku.com/.

Thousands gather in Sacramento for second annual Farm-to-Fork Festival - Thousands gathered at Capitol Mall to partake in the second annual Farm-to-Fork Festival, where demonstration tents, music stages and myriad food sellers lined the streets. It was one of the final events in Sacramento’s celebration this month as “America’s Farm-to-Fork Capital,” which culminates Sunday with a $175-a-plate gala dinner on the deck of Tower Bridge. Edward Ortiz in the Sac Bee.

Farm-to-Fork Festival Hits Capitol Mall - The second Annual Farm to Fork Celebration winds down this weekend with some big events.  Saturday, 100 vendors lined Capitol Mall for the Farm to Fork Festival.  The free event allowed local grocers, farmers and food producers to share their products with the community...Organizers say this year’s festivities drew a larger crowd than last year’s event, which attracted about 25,000 people. Ali Wolf on FOX 40.

VIDEO: Farm to Fork Festival - Saturday was the 2nd Annual Farm-to-Fork Festival and it's taking the Capitol Mall Blvd. by storm! Morgan Ragan is there to preview it. On Good Day Sac.

VIDEO: Farm-to-Fork Restaurant Week highlights California's bountiful produce - It's the availability of produce that highlights the Sacramento Farm-to-Fork Restaurant Week. Kurt Spataro is one of region's best-known chefs and he's always working the freshest ingredients of the season into his menus. News10 caught up with him as he made a fresh salad with roasted corn and red peppers at his downtown restaurant Hock Farm. Walt Gray on News 10.

Feast Q&A: 'Chando' Madrigal talks tacos and his new shop in Roseville - These days, Lisandro “Chando” Madrigal, 34, is one of the kings of the local taco game, drawing crowds to his two locations of Chando’s Tacos, going mobile with a high-end food truck and prepping to open a third location in Roseville next month. He also has a phone app for ordering that allows savvy foodies to avoid the long lines. Recently, Chando’s got some attention when it won raves in a national burrito showdown run by journalist-statistician Nate Silver on his website and blog fivethirtyeight.com. The Bee caught up with the outgoing and always-busy Madrigal, who is married with four children, to ask how his once-fledgling business is doing these days. Blair Anthony Robertson in the Sac Bee.

More tenant departures possible as rest of Downtown Plaza faces remodel - Some of the remaining tenants at Downtown Plaza could be leaving soon as the mall’s developer considers remodeling the site to coincide with construction of the new Sacramento Kings arena. With the eastern half of Downtown Plaza almost completely torn down to make way for the arena, mall operator JMA Ventures LLC said Wednesday that it has spoken to remaining tenants about “the possibility of a west mall closure” for redevelopment. Dale Kasler in the Sac Bee.

VIDEO: Big Kahuna Frozen Yogurt - Today is Cody's Birthday so we had to celebrate it Cody style and have his favorite fro-yo place in studio! On Good Day Sac.