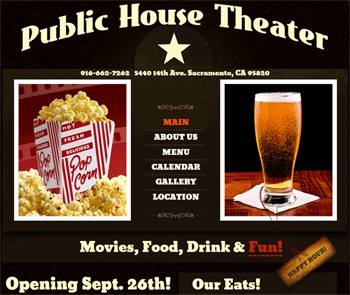 Public House Theater, a venue that lets you enjoy an adult beverage while watching a flick, is set to open on Friday in Tahoe Park. Monica Stark has more details in Valley Community News:

Whereas most movie theaters charge a lot for popcorn and soda pop to recoup the costs of proceeds lost from ticket sales to the movie companies, Nadile said she’s hoping to keep the prices down. With regular menu items such as sandwiches, paninis and pizza, Public House Theater will also offer specials from time-to-time from local restaurants, including sushi night with sake and fare from Kansai Ramen & Sushi House (2992 65th St.,Ste. 288).

Jackie said if she can find Easy Rider on Blue-Ray she will show that opening night, Friday, Sept. 26 and from opening day on, she plans on keeping the theater open for Monday Night Football games, as well as movie nights Friday and Saturday and Sunday matinee. Food and drink will be served in a laid back atmosphere. All showings will be free for the first three weeks. To start, only snacks, beer, and wine will be served. Sandwiches and pizzas will be soon.

Read the entire story on ValComNews.com.

I'm super excited at the opening of this theater. In college, I used to frequent a theater that not only served alcohol, but if memory serves, delivered food to your table.

It appears that the management intends to show older movies at first, but hopefully the concept will catch on at theaters showing first run movies.

I've been told that Empress, which will be located in the basement of the Crest Theater, will be able to serve alcohol into the theater area. I hope this means that we'll soon be able to order food and drink to go with an independent movie or performance.

Public House Theater can be found at 5440 14th Ave., and can be found online at http://www.publichousetheater.net/.

Industry toasts Auburn distributor for its work with craft beers - A local beer distributor ranks (again) among the best in the nation. Auburn’s Mussetter Distributing Inc. is a finalist for the 2014 Craft Beer Distributor of the Year Award presented by the National Beer Wholesalers Association (NBWA) and the Brewers Association. The winner will be announced at Denver’s Great American Beer Festival on Oct. 4. Debbie Arrington in the Sac Bee.

Peruvian Find!! - There's a new Peruvian joint in town and it is worth a visit! Jimmy's Peruvian is a true hole-in-the-wall joint at 3032 Auburn Blvd. Be careful. You'll drive right past it, especially since it's signage says Taqueria. In fact, it's pulling double duty serving both Mexican and Peruvian menus. Catherine Enfield on Munchie Musings.

Corkage fees cause some customers to pop off - Corkage fees help offset the loss in a restaurant’s wine sales. There’s no set formula for the fees. Biba Restaurant charges $15 per 750 ml bottle, and it’s $20 at The Firehouse in Old Sacramento. Ella Dining Room & Bar lists a $25 corkage, but will waive the fee if you also buy a bottle from their list (up to three bottles). Aji similarly comps the corkage if a second bottle is bought from the restaurant’s own offerings. Chris Macias in the Sac Bee.

Old-school Japanese done with integrity at Nagato Sukiyaki - Nagato is an establishment that does things the right way, with discipline and attention to detail. Even without the pizazz or hip décor, Nagato remains at the forefront for its devotion to consistency and great flavors, from the traditional beef sukiyaki made from scratch to the wonderful array of sushi assembled with top-quality fish and superb rice. Blair Anthony Robertson in the Sac Bee.

Whitney Johnson taps edgy creativity for restaurant design - she’s left an even larger imprint on Sacramento’s restaurant scene. Johnson, 28, has emerged as the go-to interior designer for some of Sacramento’s most buzzed-about eateries and watering holes. In addition to Hook & Ladder, Shady Lady and Pizzeria Urbano, her résumé includes the recently opened Goldfield Trading Post and the original midtown location of Bacon and Butter. She’s also working with downtown’s boutique Citizen Hotel and its Grange restaurant, and will provide the interior design for Bottle & Barlow, a much anticipated R Street bar and barbershop. Chris Macias in the Sac Bee.

VIDEO: Canyon Grill and Alehouse - The new grill just opened up in Folsom and offers great food from Irish nachos and sandwiches with a twist. On Good Day Sac.

VIDEO: Don’s Diner - Melissa Cabral is grabbing breakfast at Don't Diner this morning where they have been making their famous Yolo Scramble for 15 years. On Good Day Sac.

VIDEO: Cooking with Perkos Cafe - Paul Robins learns how to whip up a farmer skillet with chef salad and trip tip with some help from Chef Jeremy Delso of Perkos Cafe. On FOX 40.

AUDIO: Chefs Of The Tower Bridge Dinner - Farm-to-Fork festivities are all over the region through the end of next week, and Sacramento appears to have embraced all of them. Chefs around town will tell you that because that’s how they cook and that’s how many people eat in this area...So today we’re going to ask the chefs, Brian Mizner, executive chef of Hook & Ladder, and Jason Poole, executive chef of Dawson’s at the Hyatt, what they have to go through to cook for 700 people on a bridge. And we have Nicole Rogers, the Farm-to-Fork program manager for the Sacramento Convention and Visitors Bureau, to talk about all the events and about the whole notion. Rick Kushman on Capitol Public Radio.