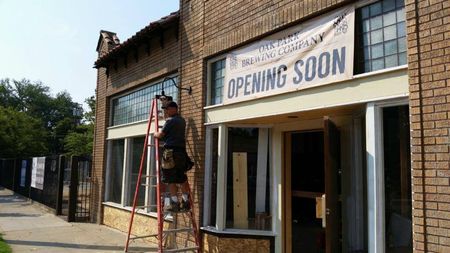 So what makes OPBC unique amidst the collective breweries in our beer-craved city? In a recent interview with the Sous chef, Eric Marais, I learned what might make OPBC different from the rest. Eric is a local chef, trained first at the American River Community College Restaurant Management program, and then at the Culinary Institute of America in San Francisco...

Eric returned to Sacramento in 2000, and cut his cooking teeth at several local restaurants, including Tuli Bistro, the Waterboy, and One Speed before learning about the vision of OPBC. Eric explained it as an affordable, fine- dining experience inspired by fresh, local ingredients, and a menu created in collaboration with the beer. Think Magpie at a brewery. This goes far beyond pub food. Eric noted, “This won’t be freezer to fryer. It’s farm to fork.”

Read the entire story in Beers in Sac.

When it opens, Oak Park Brewing Co. will be found at 3514 Broadway, and can be found online at http://www.opbrewco.com.

Roseville-based Jimboy's Tacos coming to Texas - There's a new common ground in the California-Texas rivalry: Jimboy's Tacos. The Roseville-based franchise will open its first Texas location this month, according to CultureMap Dallas. The store, which will be in Plano, is part of an expansion that's expected to include 8 to 11 Jimboy's locations in the Dallas area, the article says. Sonya Sorich in Sac Biz Journal.

Looking to the past and future at Frank Fat's - Frank Fat's is celebrating its 75th anniversary this year, and the celebrations are already underway with a special prix fixe menu through the end of October. The capital city's most famous Chinese restaurant is offering six courses of house specialties for $27.95 per person. But the party doesn't stop there. I recently chatted with Jerry Fat, Frank Fat’s son and current president of the Fat's Family of Restaurants, who explained that they are hosting a fun social media event in October. Every day from the Oct. 1 to Oct. 15, the restaurant group will be hiding a $75 gift card in different locations around Sacramento that are noteworthy to the Fat family’s history. Andrea Thompson in Sac Biz Journal.

Let's Eat: Places to try this week include restaurants at an airport and in a card room - Looking for new lunch or dinner ideas? Here are three spots to consider this week. Lodi Airport Cafe, Sammy's Restaurant & Bar inside Stones Gambling Hall and Graciano's Deep Dish Pizza in Old Sac. Andrea Thompson in Sac Biz Journal.

Breakfast Dining Gem in Carmichael - I always love discovering a good neighborhood breakfast spot—one where the food is solid and nourishing, the staff is warm and efficient, and the menu offers an interesting variety of items. I found such a spot in Carmichael recently called Lido Café & Bakery. Kira O'Donnell in Sac Mag.

ABC Bakery - For the past year or so, my favorite place to buy bao in Sacramento is at a little hole in the wall shoppe called ABC Bakery in the Pocket/Greenhaven (although Lam Kwong Market downtown is a close second).  ABC Bakery is located off Florin Road in the “Old” Bel Air shopping center. (If you’re looking directly at Bel-Air, it’s along the right side, around the corner of the building.)  It’s a very small store and there’s almost always a line. Items  run out quick- so get there early if you want the best availability. On a recent Sunday, I got there around 9am and bought some of their baked cha siu pork bao, curry chicken bao and a few hot dog bao (slices of hot dog and green onions mixed in with the dough). Ally Gaffan on A Girl & Her Fork.

Chickpeas offers vegan-friendly taste of the Middle East - Valerie and Mike Bennamer grew up in the Middle East, and when they moved to Davis they sought out familiar foods. They tried some Middle Eastern restaurants but found nothing was quite what they were looking for, so they opened their own. Chickpeas is a quick-service restaurant that opened Aug. 15 in the Anderson Plaza shopping center in Davis where Dosirak used to be. The restaurant serves Middle Eastern street food for lunch and dinner at student-friendly prices. Andrea Thompson in Sac Biz Journal.

VIDEO: Menchie’s Frozen Yogurt - Gary Gelfand heads to Rocklin to try out some of the flavors served at Menchie’s, a new frozen yogurt shop opening in town. On FOX 40.