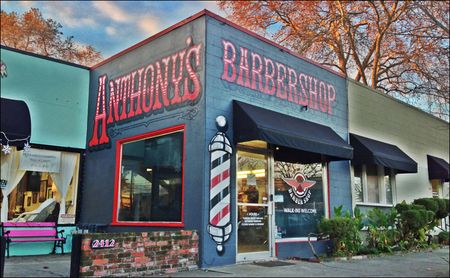 The Sac Biz Journal's Ben van der Meer reported last week that a bar/barber combo named Bottle & Barlow was coming to 12th & R, and that Hook & Ladder/Golden Bear owner Kimio Bazette was attached to the project. Now, the Sac Bee's Blair Anthony Robertson brings us more details about the venture, in a piece he wrote about a local Instagram-famous barber.

Giannotti, while still tight-lipped about the details, is preparing to launch a high-end barbershop and bar in the next six months in a new development on R Street, partnering with highly regarded bartender Jayson Wilde, manager of San Francisco cocktail destination Bourbon and Branch.

Whitney Johnson, owner of the interior design firm Johnson & Ross, which specializes in restaurants and bars, approached Giannotti about the concept and helped assemble a team to run the venture, to be called Bottle & Barlow, on the first floor of the Warehouse Artist Lofts under construction at 11th and R streets.

I've driven by that barber shop dozens of times and always wondered what the deal with it was. Thanks to Robertson's story, now I know.

Learn more about Anthony's Barber Shop at SacramentoBarberShop.com (also the source of the photo above).

Try It: Lou’s Sushi’s Tempura - I was delighted recently to find a first-rate version at Lou’s Sushi on P Street—the tempura arrived, arranged prettily on a cute little curved wooden dish, featuring one of the most delicate, crunchy and enticing coatings I have ever encountered. Kira O'Donnell in Sac Mag.

‘Family meal’ feeds restaurant staff - The food for “family meal,” as it is known to industry insiders, is often very different from what the guests enjoy. It tends to be less fussy and fancy, but perhaps more purposeful. The food needs to give waiters and bussers, cooks and dishwashers the energy to power through hours of hustle and bustle without fading. If an ambitious cook is assigned to do the honors, however, he or she might venture to get creative and dazzle co-workers, thereby making an impression that might lead to advancement. Sitting down to eat these meals is also a way to foster camaraderie, catch up on gossip and perhaps talk about issues related to making the restaurant even better. Blair Anthony Robertson in the Sac Bee.

Tight quarters, overflowing tastes at Rey Azteca in Carmichael - Later, after indulging in more dishes than we should have, two dining pals and I agreed that a fitting description of the Mexican restaurant Rey Azteca is “a little place with big food.” Allen Pierleoni in the Sac Bee.

Chef’s Table in Rocklin is getting new liquor license, not new owners - After owners of The Chef’s Table posted a notice in their front window about a liquor license changing hands, patrons began wondering whether the popular Rocklin eatery was being sold or closed. The answer is ‘no’ on both counts. Cathie Anderson in the Sac Bee.

Hop House opens in El Dorado Hills - After successfully opening four restaurants in the Sacramento region, Jason Enyeart recently launched Hop House in El Dorado Hills’ Town Center next to Bistro 33 on the Waterfront. “I’ve worked in the restaurant business my entire life, starting as a busboy and working my way up the ranks,” Enyeart said. Laura Newell in the El Dorado Hills Telegraph

Yang’s Noodles: Dumplings To Die For - Quite simply, one of the best things to eat at Yang’s Noodles are the dumplings. They’re hand-made from scratch, everything from the dough to the filling. There are four fillings to choose from; Chinese cabbage and pork; chive, shrimp and pork; celery and pork; and mixed vegetables. On ayahayah.com.

VIDEO: The TJ Dillashaw Roll - Mikuni has a new item on the sushi menu. Gary Gelfand heads out to Roseville with a look at the restaurant’s unique tribute to the UFC Champ TJ Dillashaw. On FOX 40.