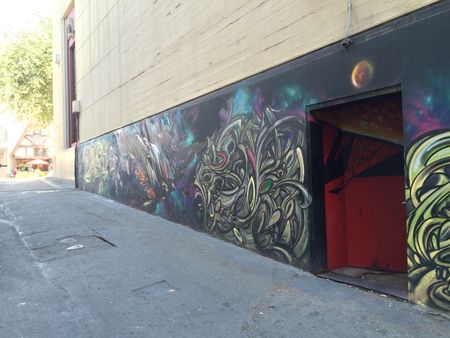 The alley where the entrance to Pre-Flite Lounge will be. In the background is Insight Coffee Roasters on 10th St.

On Thursday, the city Planning Commission unanimously approved a permit for the Pre-Flite to open in the basement of 1011 10th St., a stately building just off J Street that once housed a Wells Fargo bank. It’s across the street from the upscale Grange restaurant and next to the trendy Parlare night club.

There’s nothing upscale or trendy about the new Pre-Flite. The door to the new space opens into an alley lined with dumpsters stacked against the side of a single room occupancy hotel...

There won’t be any windows in the new bar. They’re bringing back the piano and the old jukebox. Many patrons used to pose for photographs with an oddly dressed mannequin at the Pre-Flite. The mannequin will be back.

To get a good feel for the new space that Pre-Flite Lounge will occupy, CBS 13 takes a tour with owner Jason Yee.

The owner tells CBS 13 that he hopes to have the restaurant in 6 weeks.

Pre Flite Lounge will be located at 1011 10th St., and can be found online at http://www.preflitelounge.com/.

Formoli’s Bistro nearly great, and getting better - While Sacramento’s dining scene has evolved in the eight years Formoli’s has been in business, this modest bistro has grown even more. Were it not for those mediocre desserts and minuscule missteps, it would be vying for a spot as a top-10 restaurant. For now, it’s very good – and very close. Because Formoli is so talented and his staff so professional, I’ve set the bar higher, and I expect just a bit more in the months and years ahead. Blair Anthony Robertson in the Sac Bee.

West Sac Veggie Trike - Meet Collin, the mastermind behind the West Sac Veggie Trike. He pedals fresh fruits and veggies, local honey and eggs around the streets of West Sacramento, all for very reasonable prices. One day you may find him on the state streets and another out in the Bridgeway Island neighborhood. It’s always easy to find him thanks to Facebook and Twitter. Kim Bedwell in Sac Foodies.

Nutty noodles - Sacramento doesn't have a ramen burger yet, but last month Shoki Ramen House (whose owners happen to be friends with Shimamoto) debuted the Rapanada, a burrito-esque “ramen-empanada” at a few special events. Shoki's Facebook page says it will be available soon (if not already), but in the meantime, here are a few other options in town for people who want their noodles stuck in some buns. Jonathan Mendick in Sac News & Review.

Let's eat: Three places you might want to try - Looking for somewhere different to try for lunch or dinner? Our three places to try this week include a place to get banh mi, South Indian vegetarian food in Folsom and an Italian deli favorite. Featuring Huong Lan Sandwiches, Mylapore Restaurant and Sampino's Towne Foods. Andrea Thompson in Sac Biz Journal.

A Tale of Two Sacramento Restaurants - I wanted to blog about two restaurants I have visited lately. We have been trying to eat at home lately, so going out feels like a genuine treat and we choose our destinations carefully. The first stop was the new location of Bacon & Butter, which moved from midtown to Tahoe Park, and the second is The Cultured & The Cured in East Sac. Stacy Grow on In Search of the Finer Things.

Open the menu to another great burger discovery - Our search for hamburger greatness is never-ceasing, and the hunt paid off last week at Fabian’s Italian Bistro in Fair Oaks. We happened to drop by the very night the new fall menu was being introduced, and we liked what we saw. Allen Pierleoni in the Sac Bee.

VIDEO: Fat Dawgs - Our Truck Tracker is checking out a new hot dog stand in front of Home Depot. On Good Day Sac.