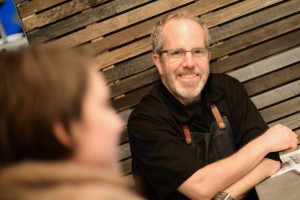 With much fanfare, Lowbrau and Block Butcher Bar chef Michael Tuohy announced last week that he would be leading the food at the new downtown Kings arena.

The Kings told Cowtown Eats that the gig would be full time, and that he would leave his current positions behind at some point. Tuohy has now given the time line for his departure, in an interview with the Sac Bee's Chris Macias.

At what point will you leave Block and LowBrau to work on the arena full time?

That’s to be determined, but we’re talking about December. It’ll be soon. I’m helping to plan the transition. Those guys (Michael Hargis and Clay Nutting) are near and dear to my heart, and I want them to do well whether I’m here or not.

I’m hoping to have a LowBrau and Block at the arena. A mini version of LowBrau is completely built for a place like that. Block could really fit a need for the VIP program where people have a little more leg room.

Chef Tuohy also revealed which local restaurateur helped him get the job.

When did you get tapped to be part of the downtown arena project?

It was about six months ago. Randy Paragary called me and threw it out there. He had a relationship with Legends, and they asked to put together a short list of restaurateurs and operators. I was on that list. As the conversation evolved, I was asked if I thought of being the chef. And no, I hadn’t. The Legends people started asking as well.

There was a competitive bidding process, and it came down to the 11th hour. Ultimately, the Kings chose Legends and we were ecstatic to hear that. I said, “You still want me to do this, right?” I was holding them to the local sourcing thing. It’s the chance of a lifetime. To think about bringing this task to fruition is exciting.

There are a lot of other newsy tidbits in the Q and A, including his plans for sourcing local food for the arena. Read the entire interview in the Sac Bee.

New Roma Bakery - Donut lovers take note—New Roma Bakery is still a must-stop shop for real brick-oven fresh baked donuts and other baked goods. I recently moved to midtown and was pleased to find that this long-time Sacramento classic is just around the corner from my apartment. I’ll be honest, at first I was thrilled and then grew very concerned—there’s no way my waistline will survive this. Sara Ortega in Sac Foodies.

White Labs, a leading supplier of beer yeasts, to open a retail shop in Davis - Several months ago, while enjoying a beer at Sudwerk Brewing’s terrific Dock Store tasting room, I met a friendly, unassuming man named Chris White. Brewing geeks will immediately recognize the name as one the great innovators of yeast for beer. His White Labs is headquartered in San Diego. Back then, White told me he was poised to open a branch of his business in Davis. Now that time has come. White Labs will hire two people to run the operation and start producing yeast there in November. The location will evolve into a place for yeast sales in the months ahead. For now, the company is selling some of its yeast cultures through the Dock Store. Blair Anthony Robertson in the Sac Bee.

Tapioca Express: Beyond the bubbles - After several visits, we had no better understanding of what makes a good boba drink or even what Shandong food really is, but none of that really matters. With its tasty Chinese snacks and rice plates, Boba Cafe is a great place to go beyond the bubble tea drink. Jonathan Mendick in Sac News & Review.

The Homebrewer's Kitchen - The new vision of Costello and his partners includes being a regional brewery that distributes in Northern California and being a destination where people can walk in and try small batches. And, of course, if customers want to get more involved they can create their own beers. “It has the core elements of Brew It Up, but the vision and direction is not the same,” says Costello one early morning while setting up shop. “It’s 15 to 20 years of learning and making mistakes and doing things right and wrong.” Nur Kausar in Submerge Mag.

Three Sonic franchises in Sacramento area close - Three Sonic Drive-In restaurants in the Sacramento area have closed, the latest and perhaps final casualties of the business demise of Roseville developer Abe Alizadeh and his restaurant empire. Alizadeh’s attorney Mir Saied Kashani said Thursday that Alizadeh closed his Sonic restaurants in Roseville, Yuba City and Woodland at the request of the state Board of Equalization, which collects sales tax revenue. Dale Kasler in the Sac Bee.

Dos Coyotes Border Cafe begins franchising - In addition, Coyote said he's in the process of signing another franchisee who wants to open Dos Coyotes restaurants along the Highway 99 corridor. Coyote opened his first restaurant in Davis in 1991. The company has two restaurants in Davis, as well as locations in Arden Fair, Roseville, Folsom, Elk Grove and East Sacramento. It serves burritos, salads, Southwest plates and tacos, as well as seasonal specialties. Sonya Sorich in Sac Biz Journal.

VIDEO: Tax Trouble Closes Three Area Sonic Restaurants - Those craving Sonic’s signature fast food in the Sacramento area might have to wait a while. The locations in Woodland, Roseville and Yuba City have all closed. Those restaurants were operated by Abe Alizadeh, who pleaded guilty to owing the state more than $7 million in sales and employment taxes in 2012. Doug Johnson on FOX 40.

VIDEO: Brunch at Shine Coffeehouse - Bethany Crouch lets us know about a new kind of brunch happening at Shine Coffeehouse for a limited time only. Chef Syl Mislang whips up one of the items on the brunch menu, a blini with coconut yogurt and cranberry tapioca. On FOX 40.