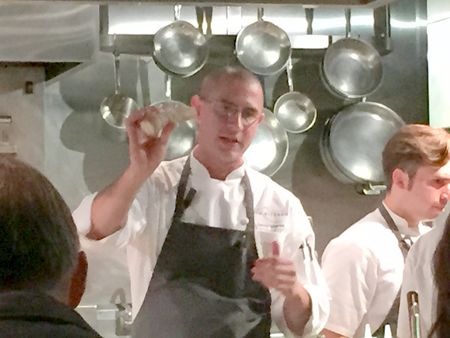 Going to The Kitchen consists of two separate parts, the food and the interactive show. They stress that they are a demonstration dinner, not just a fine dining restaurant. I’m actually going to spend very little time on the food, except to say that I very much enjoyed the food both times I went. Both menus were well thought out and executed. But honestly, there are very few meals that are worth $135 in food alone. While both visits featured great food, the experiences I had was vastly different.

Under different leadership of Chef David and Chef Griffiths, The Kitchen is a very different experience, although the price has remained stable at a very expensive $135, before tax, tip and alcoholic beverages.

Chef David took over the reins of The Kitchen earlier this month, and Chef Randall Selland is assisting during the transition. While I didn’t see Chef Randall doing any cooking, his job was that of emcee and schmoozer-in-chief, a role he clearly relished. 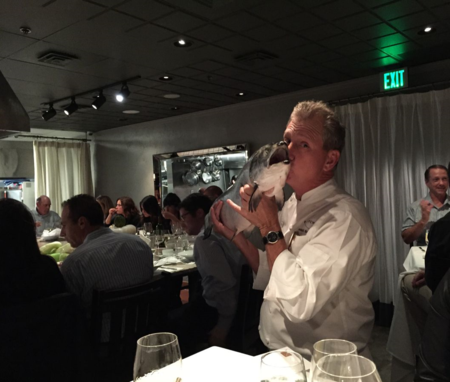 Chef Randall hams it up for the cameras. That was the fish that we later ate.

Whereas Chef Griffiths seemed reluctant to be the center of attention, Chef Randall clearly enjoys it and Chef David certainly has an energy and enthusiasm that I didn’t see during my previous visit under Chef Griffiths. Chef David clearly loves both the food he is serving and those who toil in the fields and produce the ingredients. He impressively named the farm and farmer where the restaurant’s agricultural bounty was grown.

Equally impressive was the warmth shown by the two chefs. We went on the same night as the second game of the World Series, and Chef Randall implored us to eat him out of house and home – as if he were a Royals fan. Because he and his family own the joint, it felt like an actual invitation that a boisterous uncle would give and truly mean. I’m not sure if it would be as meaningful coming from Chef David, but I have no doubt that he would try.

Chef David did, however, seem genuine in his invitation to for the guests to make themselves at home. While guests could always roam the back stage prep kitchen part of The Kitchen, Chef David seemed to really mean it, to the point that he invited guests to come plate the entrees if they’d like. 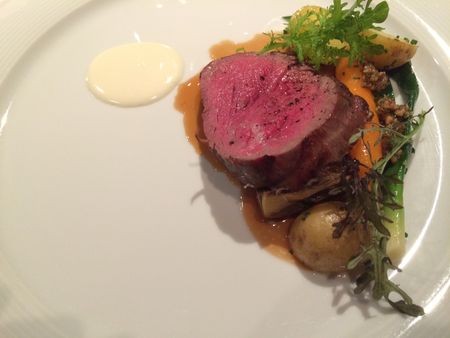 One welcome improvement since my last visit in July 2013 that Chef David instituted was diversifying the food available during the intermission. (**Update: Sac News & Review's Janelle Bitker tweets that the multiple food stations has been at The Kitchen since at least April before the change in chefs, and The Kitchen's general manager tweets confirmation that it was a change made by Chef John.) For those who have never been to The Kitchen, they start by serving the first three courses, followed by an intermission where guests are encouraged to walk around and socialize. Under the previous chef, dozens of people would line up for one of two sashimi stations. Undoubtedly, the gluttons at the front of the line would take too much, and the end of the line would be eating whatever scraps were left. Under Chef David, he increased the number of stations to five, including an oyster bar, soup station, sashimi station, truffle popcorn, etc. This one change vastly enhanced the experience, and there was plenty of food. I may or may not have indulged in more than a few oysters. 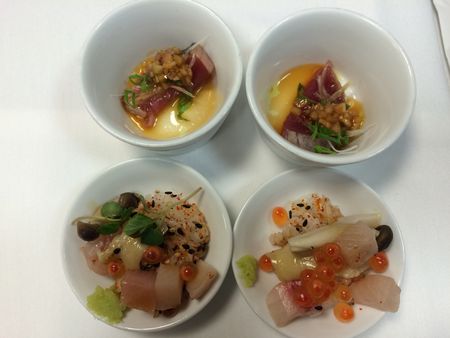 Two of the treats from the sushi station during intermission.

In addition to Chef David, all the other chefs were very friendly and willing to explain what they were cooking at that particular moment and how they were doing it. I had never seen horse radish in the vegetable form, and the chef invited me to pick it up and smell it. Another chef explained how she vacuum sealed a dish to better concentrate the flavors. 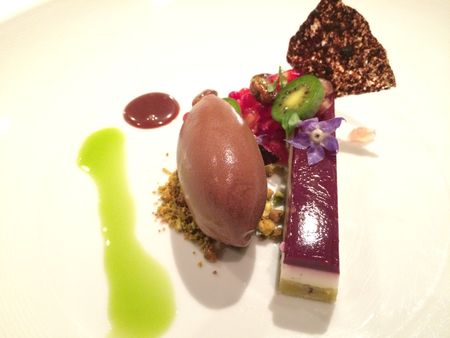 Now that I’ve been to The Kitchen twice, here are a couple tips to get your most out of the meal.

I don’t know if anybody can fill Chef Randall’s shoes as the heart and soul of The Kitchen experience. Chef David has the culinary skills to excel on the food, and I think he has the right personality and energy to eventually develop his own voice and show at The Kitchen.

My advice, though, is to try to get a reservation at The Kitchen during this transition period and both chefs are there. Chef Randall said that he would be there through the end of the year, and a check on Open Table says there are limited reservations available through December. If you can afford the $135, seeing Chef Randall at The Kitchen is a Sacramento experience that can’t be missed.

The Kitchen is located at 2225 Hurley Way and can be found online at http://thekitchenrestaurant.com/.